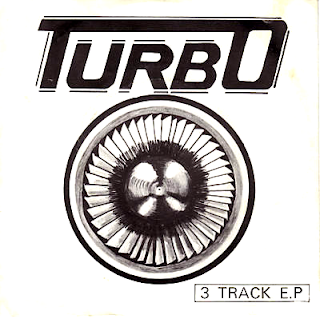 Formed sometime in the late 70s, this english Turbo (the only one from the Great Britain that I know to have reached the vinyl stage) became, decades after its demise, something of an obligatory step for those who want to delve into the fascinating realms of obscure NWOBHM. I mean, it's not a well-known band by anyone's standards, but it's not that obscure either - it's a band that you can add to your collection with relative ease and without spending obscene ammounts of money, and buying one of their vinyl releases will surely galvanize you to search for more and more obscure stuff, until you just can't stop anymore. Been there, done that. And, the most important aspect of all: Turbo was a good band, and if you buy one or both of their rare 7'' releases you are more than likely to enjoy it quite a lot.

Turbo's first individual release came out in 1980, the musicians involved being singer Des Horsfall, guitarists Pete Mayhew and Ian Blackburn, bassist Rick Payne and sticksman Chris Day. The three-track EP starts with "Stallion", an intense rocker with heroic lyrics that shows in no uncertain terms their very direct and uncompromising approach to heavy music. I guess the nicest thing about Turbo's songs is that they are almost impossible to dislike - they are so full of youthful enthusiasm and they sound so unpretentious (even a bit naive, to be honest) that it takes a lot of cynicism to criticise them with any great vigour. "Running" is perhaps their most well-known song (not REALLY well-known, you know, but it was also included on now classic LP compilation "New Electric Warriors" later in 1980) and its ultra-simple and ultra-nonsense lyrics ("Running / Running away / Running / I find no place to stay / Don't you hear what I say? / I got-to-got-to-got-to-got-to get away / I'M ON THE RUN!") are actually so damn catchy that you very well may find yourself unconsciously singing it from time to time. What a nice and funny A-side, believe me. Actually, the B-side is not exactly funny, as "Take My Life" is a heavy ballad with allegedly dreary (but actually  a bit immature) lyrics about some sort of personal tragedy. Still, it's a nice song with very effective arrangements (even the diffident piano right at the start works well enough) and closes quite well the proceedings for an extremely pleasant 7''. 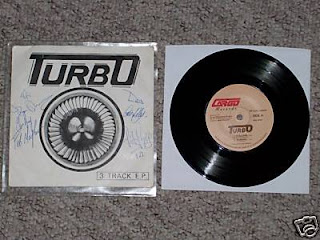 Although the relative success of their first vinyl appearances (they received a fair bit of rock radio airplay, played at London's classic Marquee Club and even captured one of their shows in video), many things would chance in Turbo after their first release, with a near-complete line-up reshuffle in the coming months. Singer Des Horsfall accepted an offer to join Raw Deal (later singing in "Lonewolf" 7'' single, released on Neat Records in 1981), and all the other guys involved in Turbo's early recordings made their leaves too, with only guitarist Pete Mayhew deciding to soldier on.  When their "Charged For Glory" single came out in mid 1982, Mayhew was assisted by a whole different set of accomplices - namely Steve McCann (V), Chris Bartlett (B), Paul Hartley (G/K) and Peter Emmonds (D). And it's remarkable that, after such changes, they managed to release a very good follow-up to their already enjoyable EP, and with virtually no audible changes in their musical identity. 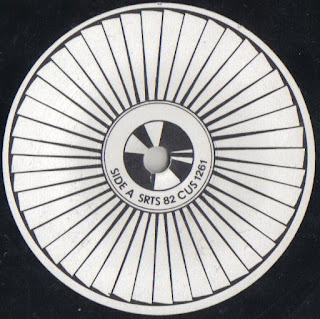 "Charged for Glory" is my favorite song from Turbo: a mid-paced, intense rocker with nice riffing, uplifting lyrics and a memorable, catchy chorus. The youthful energy of this track is remarkable, and only those with a very strong willpower (and/or an ice-cold heart) will avoid some healthy headbanging and horn-raising to this extremely likeable piece of music. Sterling stuff, one of those songs who truly epitomise the music and the spirit of NWOBHM. Understandably, the flipside of this 7'' will not mantain the same levels of pure Metal entertainment - still, "Race for the Dawn (Midnight Mover)" is another interesting effort of classic British Metal, although it takes a few listen to get used to its slightly confusing (not really complex, just not straight-forward) song structure. All things considered, and taking into account that it's far easier to locate (and less expensive) than Turbo's first EP, this 7'' is a must-buy piece of vinyl, pretty much one of the best investments for a novice trying to form a proper NWOBHM collection.

It's clear for all to hear that Turbo had genuine potencial, and they sure could have delivered a promising full-lenght LP if given the chance. Unfortunately, it never came to be, as this line-up would also disintegrate in rapid fashion and, after a year or so of trying to assemble a new set of musicians, now-mainman Pete Mayhew thrown in his towel, laying the good name of Turbo to rest sometime in 1984. Mr. Mayhew would try again with Silhouette (who recorded two singles in the mid-to-late 80s) before relocating to Germany and forming an AOR band called Turbo Red (somewhat surprising, huh?), that released a well-regarded eponymous album in 1991. Paul Hartley seemingly went to play jazz and folk music in later years, whereas Turbo's first singer Des Horsfall is pretty much active today with a semi-acoustic rock proposition called Kuschty Rye. 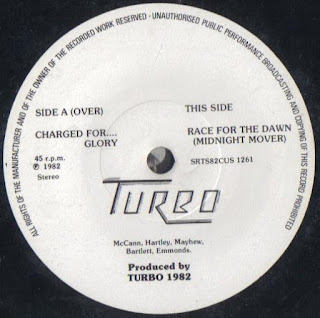 
Extra thanks to Strappado Metal Blog for picture scans!

Have you been involved with any of the bands mentioned here? Have any extra info and/or corrections? Please e-mail me at drequon@gmail.com and let me know!
Postado por Drequon às 17:28