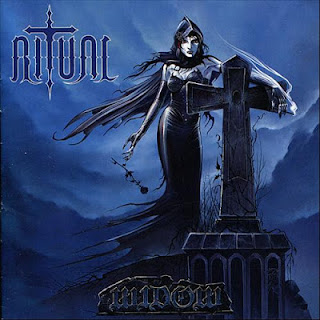 This album was almost like a riddle for many many years. A full LP that appeared pretty much out of nowhere, with a front cover picturing a naked lady dressed by the stars, a cross and a prominent "Widow" written in a gothic font. No one had the slightest knowledge of a band called Widow in the UK at the time, and the almost impossible obscurity of the band, combined with the scarse info on the album and the sheer rarity of the LP itself, turned this record from 1983 into some sort of underground legend. For more than once it was mentioned as a pioneering release for Black Metal and Doom Metal genres, something that understandably raised the Widow name into even more mythical standards. And it wasn't even the band's moniker after all...

It took quite a while, but the truth emerged: the band responsible for the extremely rare LP was actually called Ritual, operating since the first half of the 70s in the small club circuit of London and thereabouts. The album was in fact their second proper release, after a 7'' single centered around "Burning", and it was supposed to be called "Widow", the logo of the front cover serving to name the LP rather than the band. For reasons that were never really clear (even after band leader Re Beth made his best to explain it in a few interviews), most of the copies were printed without the Ritual logo in it, thus rendered useless for sale - and the whole album came to be pretty much shelved, as no one would put money to distribute such a small run of usable records. They sold a small handful of copies in gigs, but the band (although never formally disbanded) faded into oblivion towards the second half of the 80s - and some shady individual somehow took hold of the unsold copies of the LP and started selling it in auctions, marketing it as the sole LP from an utterly unknown band called Widow... The rest, as they say, is history.

Yeah, I know - the whole thing sounds implausible, right? But it's probably all (well, most) true, as Ritual somehow managed to survive nearly 40 years in the underground and "Widow" is finally issued in CD format, courtesy of the good guys from Shadow Kingdom Records. The artwork was completely redone, and the seven tracks of the original LP were augmented with four extra cuts, three of them never-before released.  And the ultra-obscure contents of the elusive and esoteric LP are now available for a wider audience - well, maybe not that wide, but you know what I mean. And we can, at last, know what all the fuss was about.

Personally speaking, I must say that the "classic" tag is a bit too much for the music here featured - but we're also far away from any disaster scenario here, as some cynic reviewers labelled it to be in times gone by. It's all very somber and hazy in the world of Ritual, and treat this bunch as trailblazers for obscure Metal music wouldn't be at all absurd. "Never for Evil", "Into the Night" (one of my personal favorites) and "House of Secrets" are more well fitted into traditional Metal territory, and the ones more likely to bring Ritual closer to the NWOBHM archetype. Most of the time, though, they are much more into the 70s sounding, bringing to my mind comparision with bands such as Black Widow, Pentagram, Necromandus and even Sir Lord Baltimore. It's not that Ritual sound like these bands (which were actually quite different from each other too): it's more of a common feeling, a shared penchant for somber themes and eerie atmospheres.

Many songs here are not "heavy" in the sense we're accostumed to, being carried along by the drive rather than by riffing, if you know what I mean. The basslines are more than often the backbone of the songs and the lyrics are extremely simple, in such a way that sometimes it even seems like they were just putting some lines together to enhance the overall atmosphere. Let's face it: some stuff they sing just doesn't make any sense at all. But this is not necessarily a problem, you know, as Ritual is all about creating atmospheres most of the time. And it works - in a sometimes rather simplistic, maybe even loosely put together kind of way, but it does. You can lay down some criticism on Ritual for a number of reasons if you like, but you can't deny that their music has a very personal and somewhat unique feeling throughout.

And this is something I would like to state: I don't think you will really get this record if you don't listen to it from head to tail, in the exact running order, as a single listening experience. Because it's not about the songs, you know - it's more like the songs are pieces of the same musical entity, as everything was planned from the start to become an unit when assembled in a LP. I don't think it was meant all along, you know - the insistent use of thunderstorm sound effects, for instance, doesn't fit well in some cases and gets a little annoying towards the end, while some songs (such as "Rebecca" and "Journey") seem to be put together at very short notice, almost like they were only half-finished before Ritual entered the studio. Still (and don't ask me how, cause I really don't have a clue), it does sound like an unit, it does sound like it was meant from the start. It's an album to be listened without interruptions and without caring too much to know when one track ends and the next begins. That's how you will get the best from it, believe me. 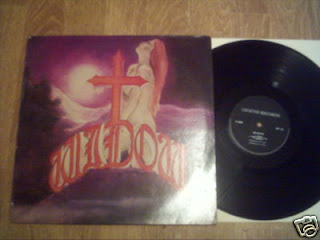 Perhaps the wider audience will lessen the legend that "Widow" evoked through the years - the more people listen to it, the more its atmosphere will slowly die away, I guess. Personally, I think that it can lose on cult status, but it doesn't lose on charm. It's still got some spell in it, you know. Close the curtains, turn the lights down, crank the volume up and enjoy it. I don't think it will become one of your favorites, but I bet you will have an interesting ride.

Have you been involved with any of the bands mentioned here? Have any extra info and/or corrections? Please e-mail me at drequon@gmail.com and let me know!
Postado por Drequon às 19:47