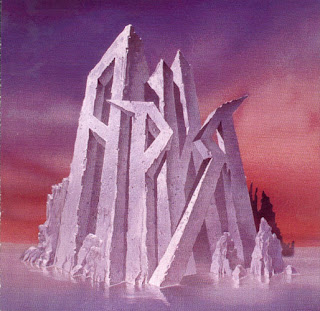 There's quite a lot of nice things to be stated about Ария (or Aria, the transliterated form I will be using from now on), and that's why I decided, after a long and difficult period of soul-searching (about 5 minutes or so, to be honest), to write a dedicated review for each of their albums, rather than putting everything in a single full-discography post as once planned. In fact, they are way way beyond the facile "Russian Iron Maiden" tag sluggishly applied to them when they happen to be a subject in the Western Metal media. They were (and still are) a huge Metal phenomenom in Eastern Europe - a Metal band born in the middle of the Soviet Union, under the pressure of a still strong Communist government, achieving massive success (they sold millions of copies of their album releases, in case you don't know) while always keeping their native Russian language, and still being regarded as a relevant proposition after nearly 30 years on the road. And the most important of all: playing very good, very impressive Heavy Metal.

Many people say that their choice to sing in Russian was (and still is) something to deprive them from world domination, a notion from which I wholeheartedly beg to differ. Actually, Aria reached the best of two worlds, being very much a mainstream band in their homeland even today, while keeping a cult status and a dedicated following in Western Europe and beyond. They just don't need to sing in English at all - I mean, of course it would be nice if I could understand their (mostly very good) lyrics in an easier way, but their uncompromising nature is very well served without giving up on their native tongue. They are already victorious in their own right, and it's something that every Metal fan should aknowledge and respect. And no less than two of their albums will get a five-star review around here - meaning that yes, I consider Aria to be a mandatory listen to anyone who wants to go beyond the surface when it comes to Heavy Metal. Come join me, then - let me tell you of the days of high adventure! :)

Aria came to be in late 1984, although being at first not much more than a brainchild of Vladimir Holstinin (G) and Alik Granowski (B). Holstinin already had a Heavy Metal background of his own, playing with Волшебные Сумерки (Magic Twilight) in the early 80s alongside singer Arthur Berkut (that would join Aria at a very later stage, but let's not rush too much into things right now). After that, he formed the short-lived Alpha, where Alik Granowski would be featured for a brief period as a bassist. Holstinin and Granowski would rejoin as support musicians for ВИА Поющие Сердца (translates as "Singing Hearts", or so they say), a considerably successful pop-rock project commanded by sound engineer and producer Victor Vekshtein that is still active today. Understandably, though, both were not really at home with the featherweight nature of the music they were performing, and the idea to form a Heavy Metal oriented side-project would develop in due course.

The original idea was to record a full album and, if the response to it was good enough, to consolidate a stable line-up. Victor Vekshtein allowed the album to be recorded in his studio and became Aria's first manager. Valery Kipelov, recently ranked to join Singing Hearts after a spell with folk ensemble Шестеро Молодых (Six Young Men), was recruited as a singer. At this time, Aria was pretty much a Heavy Metal offshot to Singing Hearts, with only Alexandrer Lvov (D) and Kirill Pokrovski (K) with no strings attached to the Russian Pop venture of Mr. Vekshtein. Russian poets Alexander Yelin and Margarita Pushkina were invited to write the lyrics, and in october 1985 Aria's debut album was complete.

Мания Величия ("Megalomania", or "Mania Velichia" if you wish to just transliterate it) never received a proper vinyl pressing - Russia's then only record label Melodiya wouldn't have it, so it just came out in cassette format until 1994, when Moroz pressed it in CD. Still, it was a very successful release in Russia and the Communist Europe in general. And it's easy to undestand why: they NEEDED it. In a reality where the Iron Curtain was growing senseless by the hour and the Berlin Wall was giving the first signs of crumbling, Eastern Europe was in search of new heroes, musicians attuned with what was happening on the other side of the Cold War world - a band they could be proud of, in resume. Their own Iron Maiden - and that is a context where the comparision surely makes sense. In "Megalomania", Aria is not quite there yet, but they shown to everyone who could listen that they were the ones who could make it. 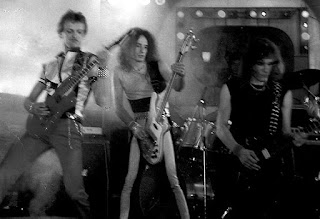 "Megalomania" is a good album, although the production leaves quite a bit to be desired (specially in the guitar department) and the band was clearly trying to find their feet at the time. Of course there's a lot of Iron Maiden, but I can also listen to lots of Judas Priest, Accept and (in places) Rainbow in here. Some songs (like "This is Fate" and "Life for Free") are adequate attempts at Heavy music, but lack personality and ultimately fail to impress, whereas "Dreams" is a sloppy ballad that may have made Mr. Manager Victor Vekshtein very happy, but scores very poor on my Metalomether. "America is Behind" is not exactly a Fuck-the-USA-all-hail-to-Soviet-Union song you would expect from the title, being much more about flying all over the world in an aeroplane (?), although the pun in the song title is evident - the composition itself being an interesting, but not memorable, effort to write a singalong stage favorite.

There's very good stuff in here too, though. "Torero" is a little monster in its own right: conducted by a commanding bass, it constantly and cleverly switch tempos to create an unique atmosphere, eerie but still forceful at the same time - and it's also one of the first songs to show just what a capable singer Valery Kipelov was. An excellent piece of music indeed. "Volunteer" builds in the same foundations and it's also a very good song, while "Tusks of Black Cliffs" is a more direct number (hugely influenced by Maiden, that's for sure) with tons of energy. The instrumental title track, although not much more than an interlude here, is also worth mention, as it is a very impressive interlude, with typical Russian choirs added to create a grandiose feeling - the easy comparision for those unfamiliar with Russian music being Black Sabbath's "Supertzar". Nice stuff. And everything is very well performed in here, full of technical skills and good ideas, being the whole recording very pleasant as a whole.

All things considered, "Megalomania" is far from being the pinnacle of Aria's career (they managed to do way better in later releases, believe me), but it's a historical release and the album to set the trails for a complete Heavy Metal revolution that would take Eastern Europe in years to come. Many bands were doing it before them, that's for sure - but I guess none were doing it better and with such confidence and dexterity.  They deserve respect for that. And the best was yet to come, for sure - which is not to say that "Megalomania" is not good, mind you. Quite the reverse - it's a pretty respectable starting line for the band they would become in later years.


Have you been involved with any of the bands mentioned here? Have any extra info and/or corrections? Please e-mail me at drequon@gmail.com and let me know!
Postado por Drequon às 11:57