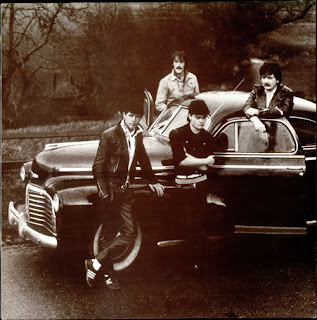 From Scotland comes Never Amber, a band usually associated with the NWOBHM bandwagon, even though they don't fit that well to the archetype either chronologically (their sole release is from 1986) or stylistically, if truth be told. There's not much info about this band, the name of musicians envolved on this one 12'' single being something of a mystery today - even though we know that "Scene of Surrender" was written by their lead singer Ian Nicoll, and that musicians such as Graeme Thompson, Ron Grant and Norman Walker (playing God knows what instruments) were involved with the band at some point. Released on a tiny Crunchy label (probably financed by band members themselves), "Scene of Surrender" B/W "Renegade is Love" never sold in  noticeable quantities at any time, even though it was recently rediscovered by NWOBHM aficionados and regarded by some as a rare and collectable memento of that days.Looking at the picture sleeve, you'll see they look adequate enough as a Heavy Metal proposition, so I guess it's fair to give them a chance on your mp3-playing device - let's face it, you will hardly want to spend good money on finding a copy of it.

To be honest, "Scene of Surrender" is far from being a good choice for the A-side, as it's a kinda boring (and very very long) ballad without any redeeming features. I don't know, maybe they thought that presenting themselves with a softer song would open doors in radio stations or something like that. Unfortunately, it's extremely difficult to imagine anyone getting all excited about this uninspiring song, so it was probably no use. I must tell you it's unlikely that I'll ever listen to it again, which is a different case completely when it comes to "Renegade is Love", the flipside of this 12''. Although it's not a Never Amber original (it is actually a cover version of Curved Air's "Renegade"), I really think they deserve credit for taking an less-than-impressive soft rock song and turning it into a enjoyable hard-rocking ditty with simple-yet-nice arrangements and a catchy chorus. Good stuff, and enough to justify this one (and, as far as we know, only) vinyl offering of these Scottish hopefuls. 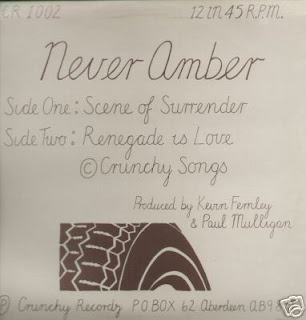 All things considered, Never Amber wasn't the kind of band that would set the world on fire - and I'm not even sure they ever wanted to, to be honest. It seems to me that they were perfectly happy on playing local gigs for small audiences, showcasing a lot of cover versions and rock'n'roll standards on their set, and I wouldn't be surprised if they released a single just to have something to sell on gigs, without any major aspirations to rock and roll stardom. It seems fair enough to me. Hope they had fun while it lasted - I'll drink to that.

Ian Nicoll (V) (other musicians still unknown, any info would be greatly appreciated!)