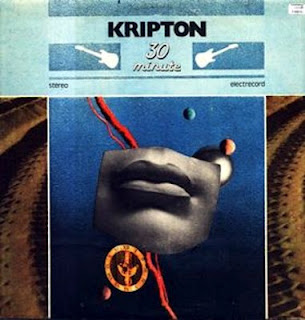 To most rock bands in communist Romania,having an album recording career was more a matter of chance than design - and when then Romania's only recording label Electrecord offered Kripton (still spelled with an 'I" instead of the 'Y' of later efforts) a record deal, they were more than willing to take the chance. After debuting on vinyl in 1986 with the four songs on "Formaţii Rock 7" compilation, the boys from Bucharest were undoubtely capable to deliver some full-lenght assault for the world to listen - well, Romania at least. Eugen Mihăescu (V/G/K) took full responsibility for composition duties, and with a little help from his friends Dragos Docan (B), Cristian Sandu (G) and Nicolae Dinescu (D) he came out with "30 de Minute". True to his word, the LP runs for exactly thirty minutes, and shows that Kripton wanted to fight hard - if not exactly heavy - for its chance to shine.

"30 de Minute" is a pleasant album. Not the most exciting and breathtaking piece of sheer creativity ever written, that's for sure - and not the heaviest music ever commited to vinyl, too. Still, it has its moments, with some good heavy rocking riffs and reasonably well-crafted songs, although Mihăescu 's voice is less-than-impressive, to be honest. He does a good job on guitar, though, and the other guys don't let us down on the instrumental side of things - especially Dragos Docan, still shy on composition front, but already delivering the goods as a bass player.

"Prietena Mea" is an adequate enough opening track, whereas "Treizeci de Minute" (nearly a title-track) and "Ploaia" are very nice songs in their own right, especially the second, my favorite song on the whole album. "Fetele Cu Ochii Verzi" and "Tatiana" seem to have been huge hits in Romania back on the day, but they sound more of the same to my ears, although the first one is an acceptable attempt to create an Whitesnake-style hard rocking ditty. Of the remaining songs, I think that "Ora Tarzie" is a nice song to close proceedings, with a whistlable chorus and a good guitar lead.

It's a bit surprising that they would continue their career with albuns such as "Fara Teama" and "Lanturile", as Kripton's first offering is more than comfortable to sail on accessible waters - as they would do in a bafflingly unashamed way not so many years later. Nevertheless, "30 Minute" left its mark and paved the way for better albuns to come. Thirty minutes of your time - that's what this album asks, and I reckon it's fair enough. 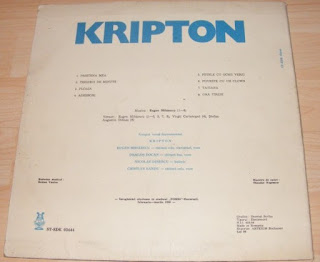 (I tried my best to translate the song titles - any corrections would be greatly appreciated!)


Have you been involved with any of the bands mentioned here? Have any extra info and/or corrections? Please e-mail me at drequon@gmail.com and let me know!
Postado por Drequon às 21:04