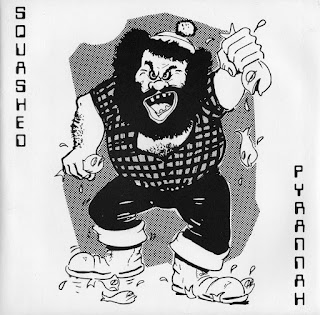 Since it was reviewed in Malc McMillan's legendary NWOBHM Encyclopedia in the early 2000's, Somerset's Squashed Pyrannah was regarded by collectors and completists as a band to search for. It was bloody damn hard to find, though, leaving most people with no choice but to look at its awkward cover art and wonder how this five-piece group would actually sound like. Thankfully, Strappado's Metal blog managed to contact one of the original members (namely guitarist Martin Treasure) and the chap was nice enough to digitalise his personal copies and allow people to download it, giving us all the chance to lend a hear to Squashed Pyrannah's attempt to take the world by storm.

It's not like they could have changed the world with their music, but this 7" from 1982 is a pleasant enough listening experience nonetheless. "Heartstop" is a nice hard/heavy song with more than a hint to the 70's biker rock, especially when it comes to its singalong chorus. Good twin-guitar work here too. "Dr. Jeckyl", on the other hand, is a less upbeat number: despite beggining promisingly enough, it soon evolves to a more restrained affair, carried along for an ever-present chorus. Everything is pretty basic, either in song structure and musicianship, but it seems that these guys knew the band's limits and were fairly down-to-earth on their aspirations, which is always something to respect. 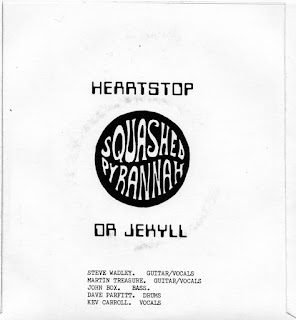 As a bonus, comes "Don't you Know", taken from a very rare compilation called "Class of'83" from - you guessed it - 1983. It's the less interesting of their songs, in my opinion, and it even sounds like an earlier offering, as it shows virtually no progression from their single offering. Not a bad song in any sense, though, and it fits well enough into Squashed Pyrannah's small but respectable legacy.

It comes as no surprise to know that they didn't last the distance, being pretty much gone at the half of the 80's. There was way too much Heavy Metal bands in England at the time and, let's face it, Squashed Pyrannah weren't strong enough contenders to survive such a fight. Still, they left a small-but-respectable vinyl legacy, and it surely deserves a listen. Thanks for the mp3s, Mr. Treasure, we really appreciated it! =)

Thanks to Strappado Metal Blog for scans and additional info!Have you been involved with any of the bands mentioned here? Have any extra info and/or corrections? Please e-mail me at drequon@gmail.com and let me know!
Postado por Drequon às 11:59