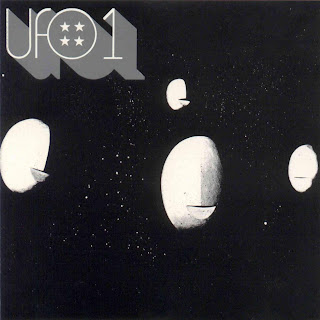 UFO's quest for world domination starts with this humble LP from 1970, a low-budget album recorded in almost live-in-studio fashion and released by a medium-sized record label. But the roots of the story behind this huge (if not comercially ultra-successful) entity lie in a previous outfit called Hocus Pocus, formed in 1968 and already with the recognizable line-up of Phil Mogg (V), Mick Bolton (G), Pete Way (B) and Andy Parker (D). It was pretty much UFO under an early guise, you see, and it makes sense to add this period to UFO's timeline, as they would only adopt their alien-influenced household name after signing with Beacon Records in late 1969, as something of an homage to the London club where they played countless times and were finally spotted by the label's representatives.

Those were still formative years for heavy rock music as a whole, you see, and it's perfectly understandable that the music here feature isn't exactly analogous to the hard/heavy input that would earn them a living in later years. It's heavy enough already in a sense, but way more in a Blue Cheer approach of heaviness if you know what I mean, with many bluesy/boogie overtones and some distinct psychedelic influences. Therefore, one must have in mind that this is not archetypal UFO by any stretch: what you're going to get is proto-metal stuff, produced by a band willing to explore some then-recent musical recipes, but also a bit insecure about what ingredients they should or shouldn't add to the cauldron.

The basslines of Pete Way are in your face here, showing how hugely influenced by The Who's John Entwistle he is, which is not a bad thing at all, of course. Phil Mogg's voice would surely mature with time, but one can easily hear the promise in songs such as the ballad "(Come Away) Melinda", one of the finest moments IMO. Andy Parker and Mick Bolton do their job in a less spectacular manner perhaps (though Parker is the driving force behind the passable "Who Do You Love?"), but the band sounds tight and catchy most of the time. Still, the production values do very little to disguise the occasional rough edges of the performance, something that may surely be unpleasant if you're unwilling to take the context of the recording that much into consideration.

"Boogie for George" and Eddie Cochran's "C'mon Everybody" would be successfull singles in the Japanese charts, and both are adequate, although a little bit too simplistic for my liking, if I'm to be point-blank honest here. Interestingly, the main riff of "Follow You Home" is a total rip-off from The Kinks' "You Really Got Me", in such a glaring fashion that I sincerely hope UFO were never sued for that! Some songs here featured are quite nice, with "Evil", "Shake it About", opening instrumental "Unindentified Flying Object" and the aforementioned "Melinda" being good examples. But listeners must be aware that most tracks are a bit too rudimentary (and with far too throwaway lyrics) for their own good, and I'm afraid nearly half of the compositions didn't exactly stand the test of time.

Despite its shortcomings, "UFO 1" made quite an impact in places like Germany and most of all Japan, prompting the group to tour the Land of the Rising Sun quite extensively from an early stage. This recognition was very important to secure them a continuing career, as the LP caused little to no reaction in its two high-profile targets, England and USA. It's not a record you should buy whatever the price, mind you, but it's a pretty decent record that surely reaches the 3-star mark, and it also works as a nice document from an era when heavy metal, as we all came to know and love, was still taking shape.

Have you been involved with any of the bands mentioned here? Have any extra info and/or corrections? Please e-mail me (drequon@gmail.com) and let me know!
Postado por Drequon às 18:38