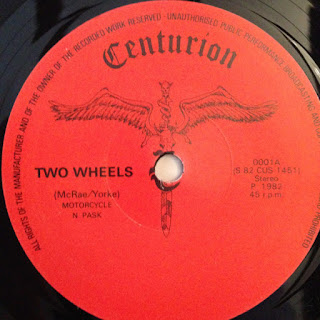 Let me start this one with a digression, so I can take a few things off my chest before proceeding to the actual review, will you? I do have a point, I promise.

It's not that I have any kind of prejudice against biker rock and/or the people who happen to enjoy the motorcycle lifestyle, I swear to God. But I could never bring myself into enjoying most of the recordings laid down by bike-obsessed bands - I wouldn't say it's torture to my ears, mind you, but I often feel like skipping such songs soon after pushing the play button, as simple as that. And I suppose most of this personal dislike comes from the unimaginative instrumentation and distasteful (sometimes even plain offensive) lyrics churned out by countless groups of the ilk. Of course I can appreciate the fact that there are biker-inclined bands from the NWOBHM era (Vardis being an example) that do try to push the envelope a little in the songwriting side of things, but these are exceptions rather than the norm, I'm afraid. Considering that the NWOBHM (though being the cradle for dozens of really inventive and highly original bands) is in itself a somewhat repetitive musical entity when it comes to its most distinguishable elements, I just don't feel too compelled to listen to an even more restrictive sub-genre, and that explains why biker rock reviews were virtually nonexistent around here up to this point. I will try my best to bring some get-your-motor-running reviews in the future (as I really consider such releases to be an important and impossible-to-ignore part of the NWOBHM legacy) but be aware that I tend to be less than charitable with such slices of vinyl, and kindly take some of the more grumpy comments with a pinch of salt.

That all said, let's focus our attention to Centurion's sole 7'' single from 1982, a mid-priced collectable pretty much since the NWOBHM became a niche of the market in the latter half of the '90s. I'm no scholar in the band's history, but it transpires that Gaz Yorke (G) and Chris McRae (D) were the core members here, putting Centurion together in the early '80s. A number of other musicians from the Humberside area were recruited through the years, including a chap named Steve, who reportedly laid down the vocals for the band's sole slice of vinyl, but didn't stay around for long enough to have his surname recorded for posterity. It's a bit of a shame really, as I have the distinct feeling (already voiced by Malc McMillan in his mighty NWOBHM Encyclopedia) that he's easily one of the best singers of the entire biker rock/metal scene. According to Chris McRae himself, a guy who opted to call himself Uncle Albert (yeah, go figure) played guitar leads on the single, and bassist Jez O'Kane completed the line-up for the recordings, pressed on vinyl via the SRT facility sometime in 1982.

"Two Wheels", the main focus of attention here, starts with a revving engine, no less. I suppose there's no room for a doubt on what is coming next, right? Yeah, you've guessed it: pretty straightforward rock/metal about the pleasures of riding a bike, wear jeans and leather, drink lots of beer and listening to rock and roll. The song structure is immensely simple, but the upbeat tempo keeps the adrenaline flowing well enough, and the nice vocals really carry the track along quite nicely. Flipside "Bitch" is a slightly less inspiring track IMO - and I'll honestly try to ignore the somewhat misogynistic lyrics, as I know those were different times and people would seldom ponder about such things back then, so it would be unfair to weigh the guys down with such a burden. It's all quite basic once again, and the anthemic chorus sure commanded some singalongs in the band's regular haunts, but I feel the whole thing just repeats itself a lot more than it should, to the point that everything starts to sound a bit silly towards the end. Still, I guess those who enjoy like-minded NWOBHM contemporaries such as early Vardis, Shader, Eazie Rider and so on are very likely to have fun with this piece, so you better make sure to have Centurion in your wants list if you happen to fit this description. Incidentally, it seems Splattered! Records is about to issue a official re-pressing of this one in the USA, so buying a copy tends to become a much less expensive enterprise from now on. 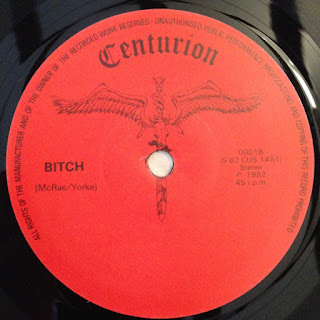 It seems that Chris McRae assumed the mike stand after the single was out, keeping all drumming duties at first but soon requesting the frontman position for good. A cassette album named "Cold Daze" was also made available at some point, and it's surely a sophomore release with Chris McRae singing, though I don't know the exact year of release and never learned of anyone owning a copy, let alone listened to the thing myself. Maybe it will be made available in a metal forum or something in the future, but I wouldn't hold my breath waiting for it to happen, you know. Centurion seems to have bitten the dust for good in 1985 or thereabouts, with Chris joining a thrash metal band named Taryn (no official recordings, as far as I'm aware), while Gaz Yorke and Uncle Albert kept things going in the club circuit, mostly playing blues in local cover bands. I'm glad to say that Chris McRae is still around, recording songs on his own and with a page on Reverbnation that really deserves a visit. The persevering individuals who write and play music for decades for the sheer hell of it are those more deserving of encouragement if you ask me, so thumbs up to the man for doing his own thing, and thanks for all the music!

Thanks to Heavy Metal Rarities Forum for audio files and some very useful info for this review! Also thanks a lot to Discogs for the label pictures!

Have you been involved with any of the bands mentioned here? Have any extra info and/or corrections? Please e-mail me (drequon@gmail.com) and let me know!
Postado por Drequon às 08:41