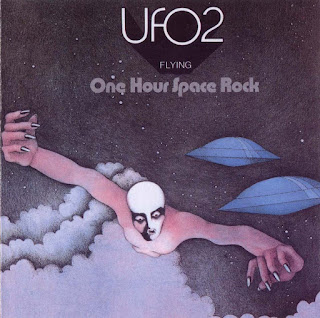 There are at least two different (and valid) points of view to be taken while reviewing this album. You can set your mind to what was the state of heavy music in the early 1970s, without taking into great consideration all that UFO was about to do in later years - a decision that will surely help you to appreciate what this album have to offer (maybe even getting as far as to consider it UFO's finest moment, as some people actually do, believe it or not). And you can listen to the music herein while comparing it to the classic albums with Michael Schenker performing guitar duties - and this very long record (the "One Hour Space Rock" warning on the cover isn't just a figure of speech, you know) will dwarf considerably, possibly sounding a lot more like an ill-fated piece of pretentious experimentation than anything else. Whether you decide to give "UFO 2: Flying" a fair chance or not, I guess it was natural for a band with such a name to make some flirting with space rock, and Pete Way (B), Phil Mogg (V), Andy Parker (D) and Mick Bolton (G) did not take the whole interstellar route halfheartedly, you see.

It's a reasonably widespread (and perfectly understandable) notion to consider the phase with Mick Bolton on the guitar as a unit, but I'd say it can cause the casual listener some sort of confusion, as this LP brings to the scene a very different musical entity from its predecessor, the bluesy/boogie proto-metal "UFO 1" (1970). This sophomore record is the kind of album that takes time: you can't just put it on as background music, you gotta give it some dedicated attention in order to fully appreciate it (or else you can be fully engaged on a LSD trip, which is going to be a entirely unrelated journey of course, but you know what I mean). Being partial with a fair bit of Hawkwind or Eloy in your spare time will surely be helpful, though ignoring everything else that was recorded by UFO before giving this one a spin may be a more challenging task for most first-time listeners. Personally speaking, I reckon you should really give this one a try in any case, as "UFO 2: Flying" is a mostly pleasant record after all. 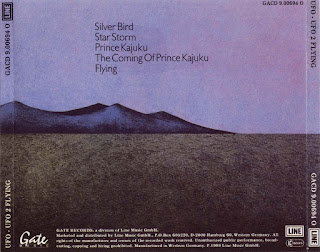 For the diehard heavy rockers among you, "Silver Bird" and "Prince Kajuku" tend to be the more relatable tracks around here, as both showcase an interesting heavy edge - specially the latter, carried along by a memorable riff and that turned out to become a live favorite for many years to come. "Star Storm" and "Flying", on the other hand, are the ones where the "space" quality takes over "rock", with the group doing their utmost to create absorbing soundscapes via lengthy instrumental suites and the occasional use of sound effects and reverberations.

Sometimes it sounds loosely put together, to be honest (you have to be very much into it to fully appreciate "Star Storm"s ambiences midway through, for instance), and it's undoubtedly difficult to create an one-hour-plus musical adventure without any filler material in places. Almost all of the five tracks could be a few minutes shorter without losing anything substantial in the process, which is in itself a testimony of how we're nowhere near a world-beater with this one. Still, it works quite effectively most of the time, and I think it has a lot to do with the tight, busy instrumentation: where "UFO 1" sounded a bit too rough-edged and rudimentary for its own good, "UFO 2: Flying" is cohesive and solid, and most of its textures are the evident result of conscious effort, rather than hit-and-miss experimentation. It's all very spacey for sure, but the 'rock' element is always there as well; you can let yourself fly (ahem) with the music, but you'll always feel you're being taken somewhere rather than just randomly floating in zero gravity, or something.

It's puzzling to wonder what UFO would have become if Mick Bolton had stayed in the group - which wasn't going to be the case as we all know, as he opted to eject himself out of the group's starship in early 1972. Maybe we would be dealing with an experimental, sci-fi oriented progressive rock band rather than the hard/heavy monster we all know and love, who knows? Or else we would live in a world where UFO were little more than an early 1970s curiosity, with obsessive collectors falling over themselves to buy scarce original copies of a seldom-seen, never-reissued LP... Oh well, one can fantasize as much as wanted, but we live in a dimension where the nucleus of Mogg-Way-Parker felt there wasn't much of a future in the space rock niche, and gave up all hopes of traveling beyond the Solar System in order to adopt a more down-to-Earth, easily recognizable hard rock sound. I'm entirely convinced the change was all for the best but, judging on this sample, UFO would still be interesting if things were a bit different, I suppose. 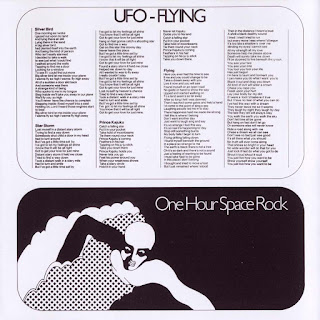 Have you been involved with any of the bands mentioned here? Have any extra info and/or corrections? Please e-mail me (drequon@gmail.com) and let me know!
Postado por Drequon às 18:44