It would be an overstatement to say "Solid Ball of Rock" set the world on fire upon its release, you know, but the mostly positive response was all Saxon needed to know to decide what to do next. Those were difficult times for heavy metal in general, and many bands felt that adding alternative / noisy / grunge leanings to their compositions would be the right move to keep people interested. But, after nearly biting the dust following an ill-fated attempt to become a hair metal band, Saxon sure knew better, and never threatened to wear flannel shirts, sport shaggy haircuts, detune their guitars or anything like that. Thank God. Instead, they wisely chose to keep on playing heavy metal, period - and it was clearly beneficial to their cause in the long run, as soon the persevering metal fans would be seeing them no longer as fallen heroes, but rather as valiant bearers of the flame. "Forever Free", albeit not yet a triumphant return to top form and with a few perceivable flaws to its credit, was warmly welcome by nearly everyone involved with metal at the time - and it's easy to understand why, as it was easily one of the most bona fide, honest-to-God metal releases of those confuse times.

In fact, the flirtations with glam metal that were still hinted in parts of "Solid Ball of Rock" are almost completely gone here, this CD being unequivocally metal through and through - and you don't need more than the opening notes of "Forever Free", the song, to have some conclusive evidence on that. Everything on it is very evocative of the glorious days of the past: from the straightforward song structure to the emotional guitar solos, from the lyrics dealing with romantic images of freedom to the anthemic chorus, every single detail on it wants to bring to your mind fond memories of days gone by, when things seemed less complicated and metal used to be the law. But don't go for it expecting some melancholic balladry or anything like that: it's all heavy, hard-hitting and very enjoyable, setting quite a nice mood for the rest of the record. A great start, that's for sure.

Fortunately, there's a lot more to enjoy on this one. The near speed-metal of "One Step Away" is absolutely brilliant, while "Get Down and Dirty" could be a (good) song from the 80's period AC/DC - not really thoughtful stuff, you see, but quite light-hearted and funny nonetheless. Yeah, I know, they wrote dozens of these from 1985 onwards, but it's actually quite charming this time around and works way better than most similar attempts from the past. "Iron Wheels" is also a winner, a ballad about Biff Byford's father that shows how poignant Saxon can be if given the chance - and it's also a nice way to rescue the lyrics from "Calm Before the Storm" (one of the worse songs out of the very bad "Destiny" album), as most verses on that one are also featured here. It's sure a good thing, as this touching homage are truly put to better use on "Iron Wheels". "Nighthunter" (fast and furious) and "Can't Stop Rockin'" (catchy) are also nice enough, so I guess there's more than enough good stuff here to please the headbangers.

There are some minor letdowns too, mind you. I'm afraid "Grind" just don't work as planned if you ask me: I see, they wanted to do something a tad more funky to give the album a bit of variety, but it's not something that is going to take you to the dance floor or anything, so what's the point in playin' funky music if no one's going to groove on it, white boy? "Hole in the Sky" have some pretty strong guitar work throughout, but I don't like the chorus at all: the song's strong build-up hints to something really explosive, then an overly-melodic "a hole in the sky, can't you seeeeee?" comes out of the speakers and I feel like magic's lost every single time I listen to it. "Cloud Nine" is OK I guess, but nothing too memorable, and Saxon's version to Willie Dixon's "Just Wanna Make Love to You" is serviceable enough, but not much else. Extra points of minor dissatisfaction goes to the production, with guitars that sound muddy on some numbers and screechy on others - and I would have enjoyed a more careful approach to Biff's voice in the mix, which is actually kinda odd, as the man himself is one of the minds behind the recording desk!

Considering the whole scenario around this release, I'd say that "Forever Free" turns out to be a further step in the right direction: I can't imagine anyone placing it as a favorite album from Saxon, but this offering made a clear point on their ongoing rehabilitation and sure stroke the right note with the band's faithful. It's a somewhat uneven effort just as "Solid Ball of Rock" before it, but both records had more than enough to spread the world around: Saxon were back, maybe not with a vengeance just yet, but no longer embarassing themselves with half-assed pop metal tunes that no one ever really wanted to hear in the first place. There would soon be further turmoil in the band's camp, when a series of odd developments led to a very acrimonious split with guitarist Graham Oliver just after the release of following album "Dogs of War". But it's the music that matters, you see, and Saxon never strayed out of the road ever since, so I guess "Forever Free" deserves a 3-star rating to symbolize its historical place in the band's discography. 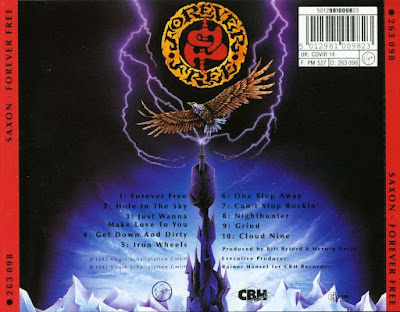 Have you been involved with any of the bands mentioned here? Have any extra info and/or corrections? Please e-mail me at drequon@gmail.com and let me know!
Postado por Drequon às 17:15