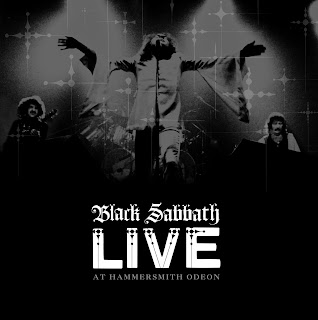 The three brand new (and very inspiring) songs included on "The Dio Years" compilation sure created quite a buzz around the renewed Dio-Sabbath partnership, and the band (now christened as Heaven & Hell so to avoid confusion with the Ozzy Osbourne version of Black Sabbath) concurrently embarked on a very sucessfull tour across the USA, that kept them very busy through the earlier part of 2007. There was still something to come out under the Sabbath logo though, as Rhino acquired the rights for some recordings made in England between 31 December 1981 and 2 January 1982, at the height of the tour supporting "Mob Rules". The tapes, assembled on a single-CD release baptised (quite unimaginatively, but nevermind) as "Live at Hammersmith Odeon", are hardly a landmark moment in Sabbath's career (the very same tour was the subject of the "Live Evil" set in 1982, you know), so there's not much need to write a book-length article about it or anything. Still, the context surrounding its release is interesting enough to justify at least a short comment, and the fact that the contents are mostly very enjoyable will sure make my job easier, so there you have it.

The sound quality is fine, and the mixing is quite competent too, as all instruments are perfectly discernible and you can even hear the keyboards in places, believe it or not. That's quite a change from the muddied "Live Evil", you see, and though I wouldn't go as far as to call it the definitive live album with Dio or anything, it will sure be a more pleasant listen if you take sound clarity seriously. I also happen to find Ronnie James Dio's performances way more enjoyable than before: he still tends to over-interpret all Ozzy-era songs to a great extent, but his voice is delightfully clear and strong throughout, and songs like "Voodoo" and "Children of the Sea" are truly worthy of mention on that front.

The tracklist also brings some curiosities, as it's the very first time that tunes like "Slipping Away" and "Country Girl" appear on a official live release. Both versions are good, but I like the latter better, the delicate guitar harmonies on the intermediate session being surprisingly soothing and charming in a live environment. The obligatory lengthy version of "Heaven and Hell" is also present as expected, and it's one of the highlights of the album, as its many improvisations never get boring and the confidence with which Dio deliver the lyrics is truly remarkable. I know, many people consider the usual subjects of Dio's poetry to be quite cheesy (and I agree with such a notion on a number of occasions), but sometimes the ethereal, fantasy-laden nature of his verses and choruses actually work to great effect, and this tune is undeniably one of such instances. As for the rest of the record, I guess there's no need to further reiterate how memorable songs like "Neon Knights" and "The Mob Rules" are, so rest assured there will be plenty to enjoy while listening to this one.

Not that the concept of a live album from Black Sabbath with Ronnie James Dio singing was unheard of, you know, but fact is that "Live at Hammersmith Odeon" was a somewhat unexpected success upon its release, with the limited edition of 5.000 copies being sold out almost immediately. As it was never reissued on its original form, it soon became a rare artifact very sought after by collectors, though it is included on its entirely on the 2010's deluxe edition of "Mob Rules", so it's not like you simply can't buy it anymore. It's one for dedicated fans anyway, so I suspect there's really not much need for another run. A more widespread live recording as Heaven & Hell would soon be around though, and there are plenty of things to say about "Live from Radio City Music Hall", that came out only a few months later. As for "Live at Hammersmith Odeon", there's no need to spend a small fortune to buy an original copy unless you're an obsessive completist, but it's a good one to have around for the occasional spin if you find a less expensive way to add it to your collection.

Have you been involved with any of the bands mentioned here? Have any extra info and/or corrections? Please e-mail me at drequon@gmail.com and let me know!
Postado por Drequon às 19:05