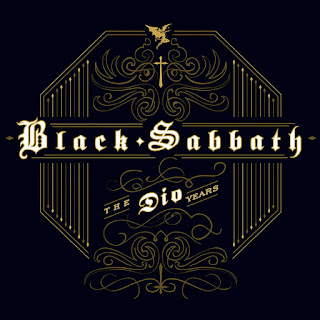 Being a support musician for Ozzy Osbourne would undoubtedly be the dream job for nearly every heavy rock musician around the globe - but such a role gets a whole different connotation when you're Tony Iommi or Geezer Butler, you know. Two of the most important musicians in the entire history of rock 'n' roll, the aforementioned lads would never be contented to just play a handful of shows as Black Sabbath on Ozzfest every year, as turned out to be the case through the best part of a decade, and were eager for a bit of moonlighting whenever possible. Geezer Butler put his "Ohmwork" album as GZR out in 2005, Tony released no less than three solo records as well (all will hopefully be the subject of proper reviews very soon), and both were presumably open to any options back in late 2005, as Ozzy was focused on a new album and there was no prospect for further Sabbath touring on the immediate horizon. The opportunity came in somewhat unexpected terms when Rhino Records shown interest in releasing a compilation culled from the Sabbath albums with Ronnie James Dio, having acquired the rights of such records in the interim. The singer himself seemed very open to work again with his former bandmates, and soon arrangements were made for a few get-togethers in the studio.

Initially named as the drummer for such sessions, Bill Ward shown the first signs of his, let's say, difficult personality and jumped ship even before the sail had started, citing some obscure "musical differences" he never bothered to properly explain. Unwilling to risk losing momentum, the trio just invited Vinny Appice in, effectively reuniting the "Mob Rules" and "Dehumanizer" line-up, and I'm entirely convinced it was the right choice, as many later controversies involving Ward are well enough to testify. This revamped entity later renamed themselves as Heaven & Hell to avoid any confusion - and/or some dreaded lawsuits from the Osbournes camp, as Black Sabbath with Ozzy was still legally an ongoing concern at the time. And, as soon as these talented gentlemen got their feet on the ground, some pretty respectable music came out to make our day.

"The Dio Years" was first conceived as a box set with all Sabbath albums from the Dio period, but the idea was temporarily shelved (it would later come to fruition as "The Rules of Hell" in 2008) in favor of a more compact compilation CD. Those who just never let go of the 70's Sabbath will probably forever disagree, but there's yet another chance for them to realize just how worthy of attention all the albums recorded with Dio are. What we got here is a band that sounds different (less experimental, more concise and, honestly, forceful than most of the Ozzy years), but still is undeniably Black Sabbath through and through - and overlooking it still seems to me as silly as it probably was back in 1980, when the truly classic "Heaven and Hell" LP came out. It's all very enjoyable of course, and the track selection is mostly spot on - I would have let "Turn Up the Night" out and brought "Country Girl" in instead, and "Time Machine" should definitely have made it into the finished product, but that's pretty much it. But there's little reason to exhaustively elaborate upon such already well-know songs, so let's cut the crap and get straight into reviewing the three brand-new compositions here featured, OK?

For starters, let's say that all of the previously unreleased songs ("The Devil Cried", Shadow of the Wind" and "Ear in the Wall") are way better than both "Psycho Man" and "Selling My Soul", the two unspectacular inclusions to the "Reunion" live set in 1998. And it's not a case of badmouthing Ozzy Osbourne or anything, it's just that the band clearly took their time properly writing the songs this time around, rather than just knocking things together at short notice, as it seems to have been the case nine years previously. Both "The Devil Cried" and "Shadow of the Wind" are slower, grinding numbers with atmospheric connotations and riffs aplenty (not to mention some truly nice solos!), delivered with supreme confidence and with some cool (and never intrusive) twists and turns to make things even more interesting - the dramatic ending of "Shadow of the Wind" is no less than outstanding, readers take note. Immensely enjoyable stuff, reminiscent of the most doomy moments on "Dehumanizer" perhaps, but with a charm all of their own. And final track "Ear in the Wall" is a faster, more direct number that could perhaps have benefited from a more memorable chorus, but still holds more than enough good features to be a very compelling listen. All in all, a very strong batch of new compositions, and more than enough to justify every penny spent on buying a copy.

As above stated, the whole project was rebranded as Heaven and Hell even before "The Dio Years" was out, the Black Sabbath name being kept solely for the purposes of this release. It was a wise move if you ask me, as it made clear from the start that the foursome were willing to move beyond their former laurels and do new stuff on a constant basis, and it also offered a good excuse to focus on songs written with Dio when playing live, without anyone among the crowd screaming "Paranoid!" or stuff like that. A nice prospect really, and Heaven and Hell gifted us with some pretty tasty fruits through their (unfortunately very short) lifespan as a band.

Have you been involved with any of the bands mentioned here? Have any extra info and/or corrections? Please e-mail me at drequon@gmail.com and let me know!
Postado por Drequon às 17:09