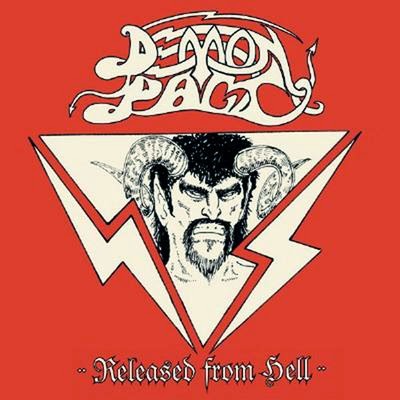 Demon Pact came and went very quickly at the height of the NWOBHM boom: took part in a local-band compilation ("Kent Rocks", 1981), released a 7'' single (also in 1981, coupling the tasteful ode to cannibalism "Eaten Alive" with the slightly less tongue-in-cheek "Raiders") and promptly disappeared without a trace. Their very intense (and somewhat politically incorrect) music, carried along by extremely rude vocals, captured the imagination of those who enjoyed more blasphemous branches of Heavy music - and the front cover of their sole vinyl offering, depicting a scantly-clothed she-devil with huge bat-like wings, surely helped matters. It took over three decades for the world to hear all that Demon Pact had to offer - but the good old High Roller would not let us down for long, and now we have "Released from Hell", on both CD and vinyl, to show what the fuss was all about.

The instrumentation is competent enough, but don't expect any showcases of dexterity: they keep it (mostly) tight and (always) simple, their raw interpretation of the NWOBHM ethos sounding like a slightly less frantic and more riff-oriented version of Venom. I always considered Donald Meckiffe to be a fundamental part of Demon Pact's appeal: his rasp, kinda sloppy (and hardly in-tune) vocal delivery may sound a bit too jarring for some ears, but definitely adds an element of intensity to the music, sounding even a bit menacing sometimes - listen to him on "Eaten Alive" and perhaps you will get my point. It comes as no surprise to learn that his decision to leave led the band to almost immediate desintegration: his singing was unsophisticated perhaps, but it was surely unique and potentially unreplaceable. 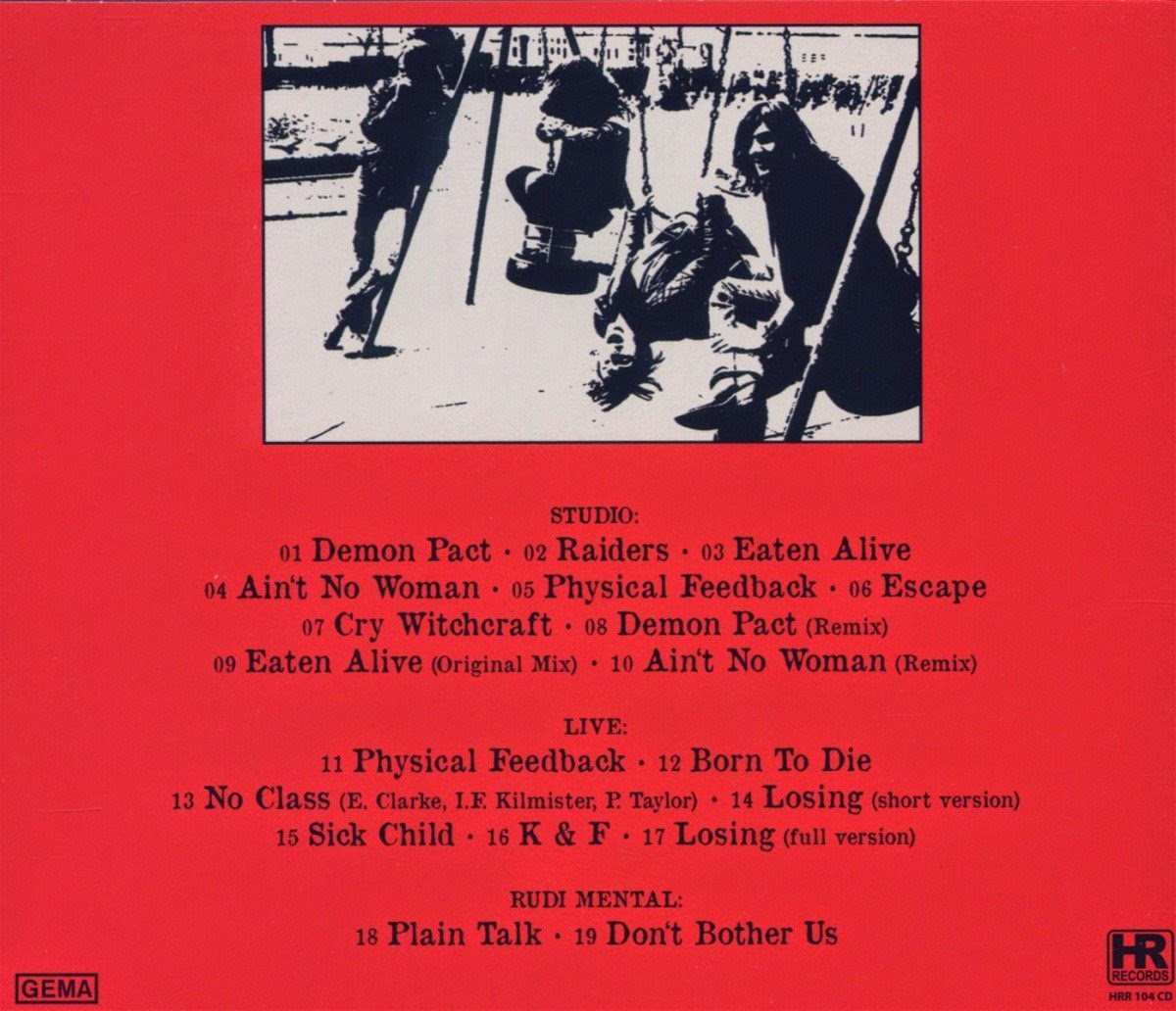 Some songs are actually quite strong, such as the aforementioned "Raiders" (nice bass playing and a reasonably catchy chorus, my personal favourite really), "Demon Pact" and "Escape", all presenting the band at their heaviest and with some pretty respectable riffing too. But this CD also shows that the lads still had to considerably hone their songwriting skills if they really aimed to better things, as "Ain't No Woman" and "Cry Witchcraft" were both very rudimentary in terms of song structure. There was a lot of talking about an "unreleased album" from Demon Pact, but "Release from Hell" is proof that it was urban legend after all: their studio legacy is brief (only 7 songs) and the production is raw, to say the least - enough for a few demos and a semi-independent 7'' single, but I suppose they would need further visits to the studio if they ever wanted to release a full LP at the time.

But even the rough edges of the studio offering sound almost overly-produced when we get to the live section of this CD: everything is so poorly recorded that sometimes you can hardly understand what's actually going on. Donald's voice is even more crude than usual, and it's fair to say that ditties such as "Physical Feedback" and "Sick Child" (some of it recorded when the band was still called Fenris Wolf) seems to have been spawned from the very depths of hell, for good and bad. Maybe even Lemmy Kilmister would be a tiny bit shocked with the noisy version of "No Class" here featured... This album closes with two rather pointless inclusions from an ill-fated late 70s project called Rudi Mental: the connection with Demon Pact is extremely tenuous, the production is very poor and the punk rock leanings of "Plain Talk" and "Don't Bother Us" are of minimal interest for NWOBHM addicts. Well, I tend to think almost every piece of music on Earth deserves an official format to call its own, so let's assume it was the only way it would ever find the light of day and hope some more tolerant punk enthusiasts will find joy in listening to it. 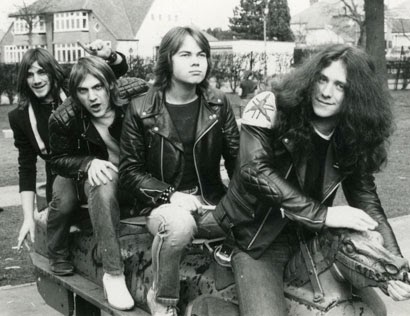 All things considered, "Released from Hell" is a good compilation for NWOBHM collectors, but I tend to think those who are not really obsessed about the period in question may find it a bit less enjoyable as a whole. Not that this CD was ever meant to conquer the world in the first place, of course. Maybe Demon Pact could have achieved a higher profile if they managed to stick together a while longer, but I reckon they fulfilled their actual lifespan; let's face it, the scarce vinyl legacy and the lack of information about the band were decisive to create an aura of mystery, and this is what made them underground legends in the end. 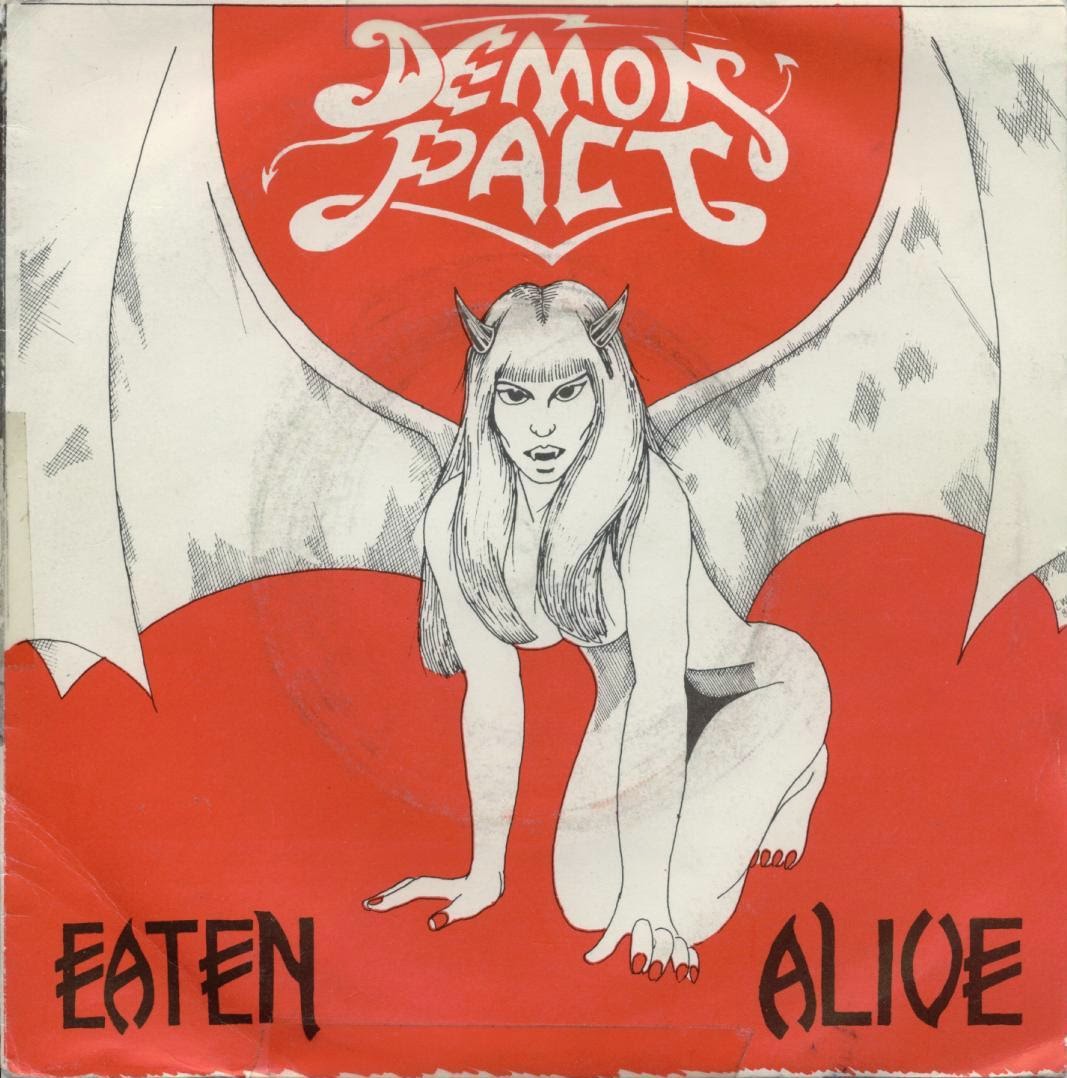 Have you been involved with any of the bands mentioned here? Have any extra info and/or corrections? Please e-mail me at drequon@gmail.com and let me know!
Postado por Drequon às 08:14