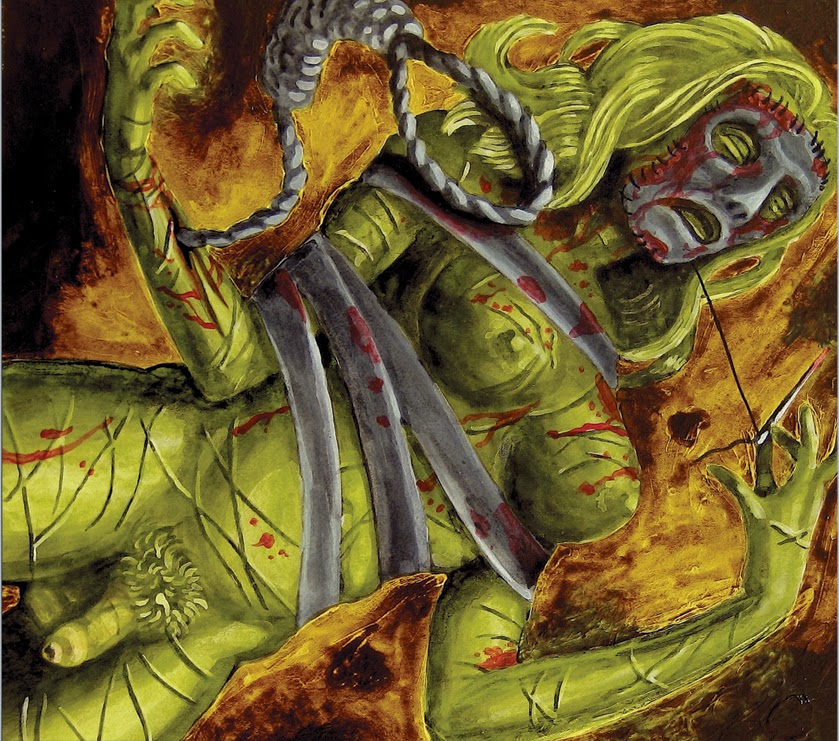 If there's any sort of soundtrack in hell, I think it's safe to say that Lord Mantis is getting very close to sucessfully transcribe it. "Death Mask" is their third attempt to conjure something terrible and unnamable with their music, and I wouldn't be remotely surprised if a few demons start hanging around your house after a single listen of this CD. To take the bizarre metaphors even further, I think that this album (starting from its magnificently disturbing artwork) may be very difficult for most heavy metal fans to stomach, and even those already initiated into sickening music will need some time to fully digest the foul meal Lord Mantis is serving this time around.

Their brand of blackened sludge metal is corrosive enough to dissolve generous doses of drone and doom into it, creating a pestiferous bouillon that reeks of terror and tastes like pure insanity. Lord Mantis also adds a disturbing ritualistic feel to their music, like they're invoking despicable things rather than just singing about it. It's a somewhat hypnotic atmosphere, enhanced by groovy-yet-abrasive guitars and song structures that create a sense of vertigo, a twisted kind of drive perhaps comparable to slowly sinking in fetid quicksand. And I must say that Charlie Fell's singing is one of the most raspy and desperate I have heard in quite a while. Actually, instrumental track "You Will Gag For the Fix" comes as an unusual kind of relief: though the ambiences are far from soothing, there's not a single word being shouted or muttered in it, and it gives the listener a pause to breathe before that perverted monster comes out of the speakers once again.

It's hard to mention single tracks here, as the atmosphere the album conjures is the real winner. It starts fast and desperate, then slowly submerges in unpleasant blurriness until you just realize there's no longer a way out. "Death Mask" is a cohesive unit, in such an extent that I seriously doubt any individual songs would have the same effect if taken out of the running order. Still, I think that "Possession Prayer" (with a truly scary chanting of "Blood! Rust! Incinerate!" that gets the more uncanny due to its apparent lack of sense), "Negative Birth" (some intimidating blast-beats going on, and the singing is particularly filthy here) and "Body Choke" are impressive enough to deserve special mention. "Coil" is also interesting, with some morbid spoken intro being followed by unwholesome robot-like singing, but the track as a whole is more like a long and vile interlude than a proper composition. Still it works quite well, that's for sure, thanks to the cohesive flow I mentioned above.

Lord Mantis sound twisted, repulsive, brutal and most of all unique on "Death Mask", surely one of the most disturbing (and individualistic) listening experiences in recent memory. I wonder if any other bands will dare to follow their footsteps in the near future.

Have you been involved with any of the bands mentioned here? Have any extra info and/or corrections? Please e-mail me at drequon@gmail.com and let me know!
Postado por Drequon às 15:33