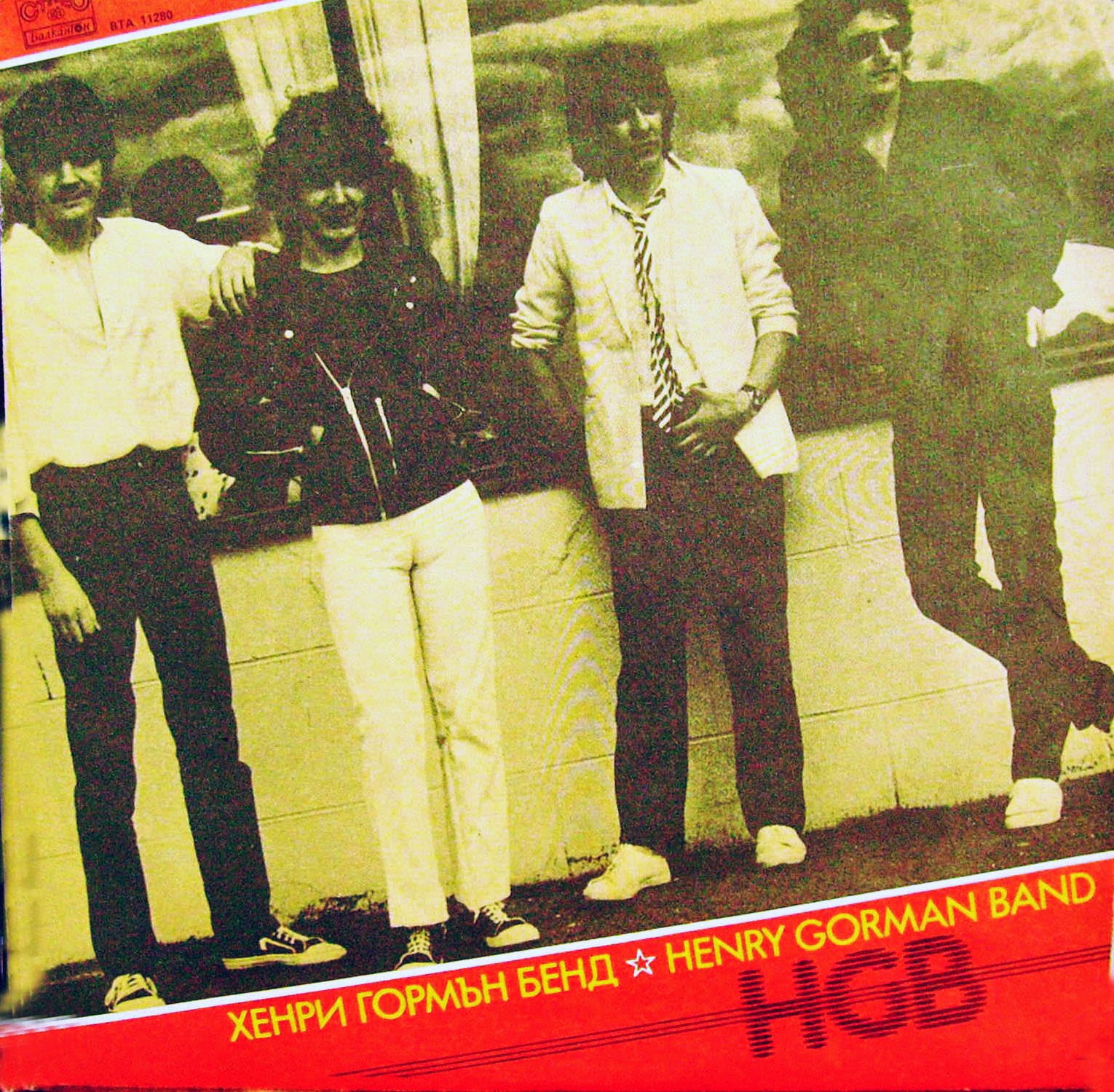 Wonders never cease, really. I must admit I was really surprised when I first found out about a full LP from Scotland's HGB (the Henry Gorman Band, as some of you may be aware), as I thought for a long time that the "Chase the Night Away" 7'' was their only vinyl legacy. Turns out I was completely wrong: the band somehow became a well-regarded act behind the Iron Curtain in the mid-80s and went as far as to issue a debut LP in Bulgaria (!), which was probably the most unexpected place for a Scottish bunch to release an album at the time. The album in question came out in 1984, though most (if not all) recordings were probably made way earlier, in 1981 or so. It's perfectly understandable that even the most obsessive NWOBHM collectors were unaware of the album's existence for quite a while, as Bulgaria was hardly a place to search for undiscovered NWOBHM in the first place. But I have a theory that the most unexpected a find is, the more likely it is to be found - we often find things when we aren't actively looking for it, and you know that it's true, dear reader. No one was really looking for a HGB full album, I guess - not because HGB was too bad to create any expectations (it's not the case at all), but only because no one would have imagined such a development from such an obscure act. And all of a sudden, lo and behold, someone just found it.

Labelling HGB as a NWOBHM act is actually taking a bit of a liberty here, as I don't really think they ever wanted to be a Heavy Metal band at all. Most of the time, Henry Gorman and his partners just try to be a good rock 'n' roll band, which is totally acceptable if you ask me. Actually, "Chase the Night Away" is slightly deceptive, as this undeniably  interesting Heavy Rock tune (augmented with prominent keyboards in a definitely 70'ish mood) is quite different from most of the other songs on display. Following song "Stranger" is much more attuned to what HGB seemed to really have been about: Classic-Rock-Radio oriented stuff that reminds me of Bad Company, Bachman-Turner Overdrive, Boston and so on - not in the same league of the aforementioned bands, of course, but nothing too objectionable either. Sometimes they actually manage to sound pleasantly intense and forceful, as songs like "Coming Down" and "On the Run" (despite the somewhat monotonous chorus) make perfectly clear. But these are exceptions for the rule, as the persevering combo (it seems they were doing the rounds in native Scotland as early as 1978) is happy to deliver innofensive, easy-going rock tunes like "Keep Off the Grass" and "Too Late to Love Somebody" at every available opportunity.

HGB's eponymous LP is not a bad experience at all, but sometimes the band seems rather unfocused and inconsistent to be honest. "This Time Tomorrow" is a yawn-inducing ballad that attempts to evoke feelings of melancholy but turns out to be just plain boring, while "So, So" is just too dull and poppy for its own good and "Don't Say No" is a cabaret ballad that really have no place in a rock album like this one. Side Two is particularly difficult for more convict headbangers, as only "Daytime Lover" (good guitar work, even though the song as a whole is closer to AOR than anything else) will come to the rescue - and it's not like SWAT is coming to save you from harm, if you know what I mean. The production is pretty basic and the instrumentation, albeit undeniably competent, won't raise any eyebrows in the virtuoso-obsessed world we're living in - even though Henry Gorman himself is quite a capable guitarist, it has to be stated. All things considered, this LP discovery is not one to please most NWOBHM palates, being more suited for long-time collectors rather than newcomers to the genre. I actually kinda enjoyed the ride, but I'm sure most long-haired metalheads will prefer to spend money somewhere else. 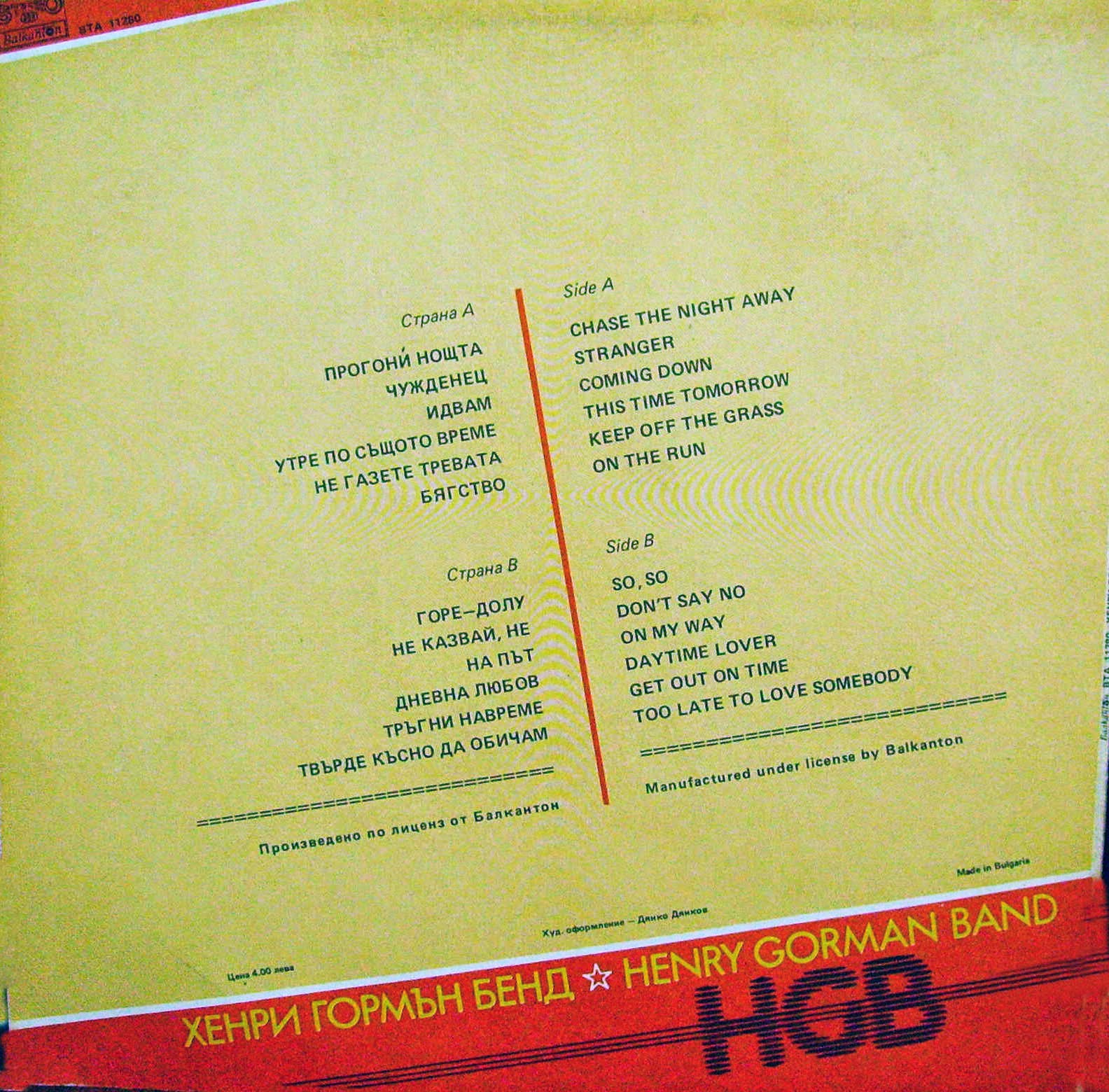 Surprisingly, the songs from this studio session were revamped in a recent vinyl called "The Past is Alive", released by ONR earlier in 2014. Most of the tracks are taken from the elusive Bulgarian release, with "On My Way" and "Get Out on Time" being ommited and a song added called "Movin Out". You won't be losing much, as the two missing songs are hardly stand-out tracks from the original vinyl issue, so if you really need to add some HGB to your collection then "The Past is Alive" may be a good (and least expensive) choice. As for HGB, it seems they were disbanded not long after their debut hit the Bulgarian shops, as Henry Gorman decided to relocate to New York in 1984 - a good move it seems, as he made a good career for himself as a session musician and songwriter. He made an appearance with The Far Corporation (something of a Toto offshot put together by producer Frank Farian) and released a somewhat sucessful album with a band called Big Stupid Guitars in recent times, so it seems he kept himself quite busy. Long may his career continue.

Many thanks to Heavy Metal Rarities forum for audio files and picture scans!