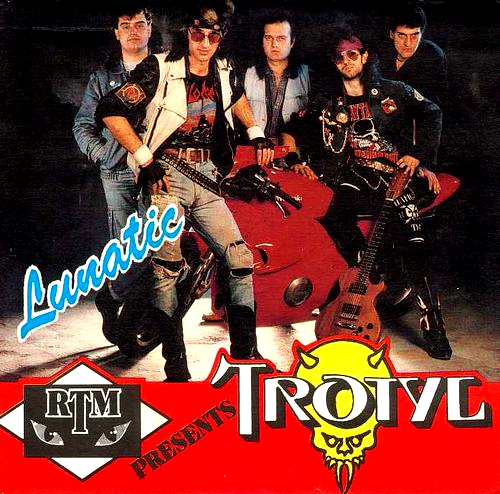 There's a lot of Heavy Metal waiting to be found in Eastern Europe, you know. Once hidden behind the Iron Curtain, many bands from the 80s tried their luck with loud guitars, high-pitched vocals and heroic lyrical themes, all with different levels of sucess of course. The fact that they were submited to a considerable degree of isolation from the Western increasingly-globalized culture rendered many Heavy Metal contributions from Eastern countries to sound quite unique - and I'm always very interested to learn more about this geographical area, as there's a fair bit of interesting music waiting to be heard. I must confess I knew nothing about Trotyl from Bulgaria until a few weeks ago, when I managed to obtain mp3 files from their "Lunatic" single - I had no clue they actually released a few full albums of their own and were active, in a way or another, until 2010 or thereabouts. I still didn't put that much effort into grabbing the rest of their discography, but I suppose their debut single (released sometime in 1988) is a good introduction to their musical legacy.

"Lunatic" is Heavy Metal as traditional as it gets, with simple-yet-effective riffing and undeniable influence of Accept in the vocal department. Curiously, each song has a different singer, this one being delivered by Vasil Kalpachki. Not sure if they were changing vocalists at the time or if having two singers was the idea all along (there's five musicians pictured, you know), so any enlightenment will be greatly appreciated of course. Whatever the story, Vasil's vocal register is adequate for the True Metal feel of the song and it's fair to say he does a commendable job here. Perhaps "Lunatic" won't be the most staggeringly original display of Heavy Metal you'll ever hear, but it's a pleasant song with a good instrumental section and a reasonably catchy chorus, so I guess most long-haired, big-bellied metalheads will have a good time listening to it.

B-side "Warrior" evokes a different and much darker feel, although the Doom Metal suggestions from some quarters are considerably out of the mark, at least when it comes to this particular track. The idea seems to be more epic than gloomy, with lyrics depicting a fighter who's afraid to die - not an unusual subject for Heavy Metal bands, that's for sure. The song reminds me a little of "Black Candles" from Oz (a healthy comparision, I would add) before changing things around with an intense interlude packed with guitar leads. The vocals (from Julian Konstantinov this time) are deeper and more forceful, and it really adds to the overall atmosphere. Nice track indeed, and you are well advised to give it a listen when you have the chance. 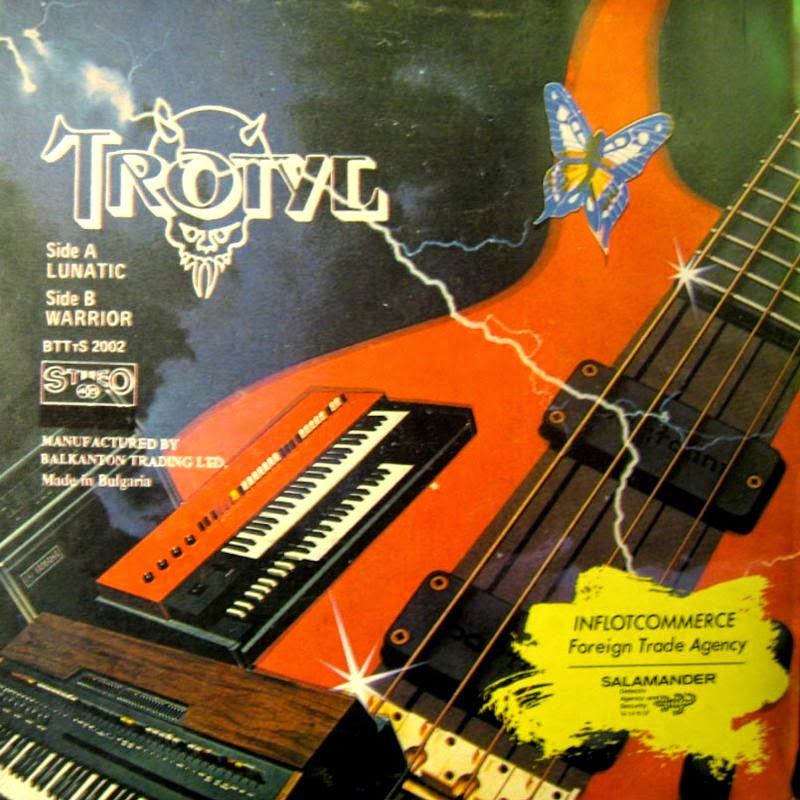 Trotyl (which translates as "trinitrotoluene", or TNT if you like) were already doing the rounds for a while when this 7'' was issued, being formed in 1981 or thereabouts - and it took another while until these Bulgarians would release another record, the "Nosht" LP from 1995. They were never the most prolific of acts though, and I'm sure the difficulties inherent in being a Heavy Metal band under a communist regime took a major role in Trotyl's shortage of vinyl releases. It's a good find if you're want to expand your 80's European Metal collection, although only a minority of us will be willing to pay the considerable ammounts of shekel required to buy such an item.

Many thanks to Strappado Metal Blog for audio files and picture scans!

Have you been involved with any of the bands mentioned here? Have any extra info and/or corrections? Please e-mail me at drequon@gmail.com and let me know!
Postado por Drequon às 14:27