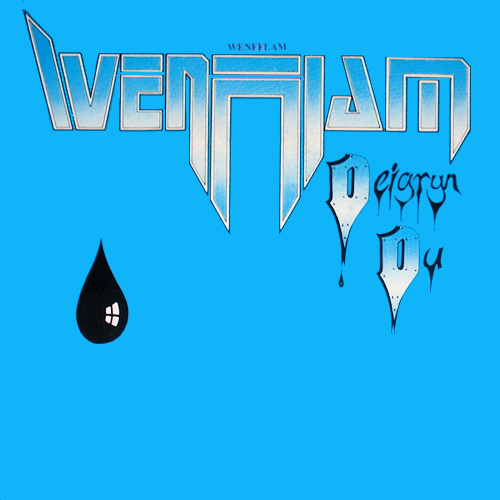 I was looking forward to listen to Wenfflam (another band from Wales that have chosen to sing on their native Welsh language) for quite a long time, and most of my curiosity was surely indebted to the simple, but surely eye-catching picture sleeve to their sole "Deigryn Du" single from 1986. The Metal-looking logo is enough to spark the imagination of any Heavy Metal fan, and the sheer scarcity of this 7'' (issued by Tryfan, a minuscule subsidiary of Sain Records) sure gave some collectors a few sleepless nights. Furtive glances and surreptitious whispering used to regard Wenfflam ("Flames", in a free translation) as some sort of late-NWOBHM forgotten miracle, and the fact that no one seemed to have heard their music until a few years ago only fostered the cult status around it. On the other hand, experience taught me that Welsh-singing rock bands use to be quite fond of recording watered-down ballads at any available opportunity. That is something that truly intrigues me BTW: why are Welsh-speaking musicians so obsessed with balladry? Maybe there's something to do with the geography of Wales, the montainous landscapes and sparsely-populated coastal cities being propitious for a more contemplative mood... Oh well, I don't know. Wherever the explanation lies, I had my spirit prepared for all kinds of unpleasant surprises when I finally managed to obtain mp3 files taken from this extremely elusive slice of vinyl.

"Deigryn Du" (the songtitle means "Black Teardrop", believe it or not) is a very mellow ballad (no surprises here, right?) that could actually be passed as a more radio-oriented song from a Heavy Metal band if we had any grounds to say that Wenfflam was a Metal outfit in the first place. The lads were apparently very young, but their individual performances are all acceptable as a whole; that's actually too bad that their efforts were focused in such a faceless composition though. The guitar solo is somewhat more punchy, that's for sure, but the song as a whole is unlikely to set any pulses racing. Flipside "Mynadd Byw" is a more upbeat number, admitedly, but don't expect any skull-crushing Metal assault to be launched here: it's a very basic rock number that sounds like a more restrained version of Stray Cats. Nothing too disgraceful at all, but I seriously think that NWOBHM collectors have far more fitting options in which to invest their hard-earned cash.

Apart from the two songs from this 7'', there are three more studio recordings of Wenfflam known to exist. "Lisa" is another rock 'n' roll tune with more than an influence of rockabilly-oriented acts from the early 80s - another indication that the nice logo was pretty much anything that Wenfflam had to do with Heavy Metal at the time. "Creithiau Ddoe" is something of a positive surprise, as it's a slighty more forceful semi-ballad with good guitar work in places - there's even an almost-metallic instrumental section here! It seems to have been the most successful song from the band, as it was even aired a few times in Welsh TV, and it's not bad at all - not a world-beater by anyone's standards, but way better than "Deigryn Du" for instance. Still, the closer we'll ever get to Metal territory when it comes to Wenfflam will probably be "Cyn Ddaw Y Bore" - a very upbeat rocker that could even pass as a bona fide Hard Rock tune if given a proper production. They seem to have been quite interested in guitar interplay, and the solos are pretty good once again. I suppose these two compositions are from a later period in the band's career, with some line-up changes and a revised repertoire. Whatever the story, it's a shame that they never released a second single, as I have a strong feeling that it would be more appealing to our tastes than "Deigryn Du" turned out to be. Watch the video below and judge for yourselves.

The Welsh-language rock scene was a very small one at the time (and it still is today), so it's perfectly understandable that Wenfflam's lifespam was a short one, the lads deciding to disband long before the end of the 80s. Most of the musicians involved seem to never have taken any role in music afterwards, but there are still some clues to be checked. It seems for instance that Declan "Paddy" Parry - a well-travelled bass player for local bands like This Thing, Hitchcock and Army of Crows, now with none other than Marshall Law - is the bass player wearing a Metallica t-shirt on the video below, although the full extent of his spell with Wenfflam is still to be determined. Huw Owen, credited as bass player in "Deigryn Du", is also supposed to have taken part in other bands from Wales, but it's a very common name over there so it's difficult to tell without asking him first. Finally, I was told long ago that original guitarist and songwriter Edward Huws gave up any plans of local rock stardom and decided to pursuit a career in classic music, but this info can also be completely wrong. If any of you good people can help me to fill the gaps, please kindly get in touch, as there's no reliable info on Wenfflam anywhere and I think that it would be fair to give them the dignity of a proper bio.