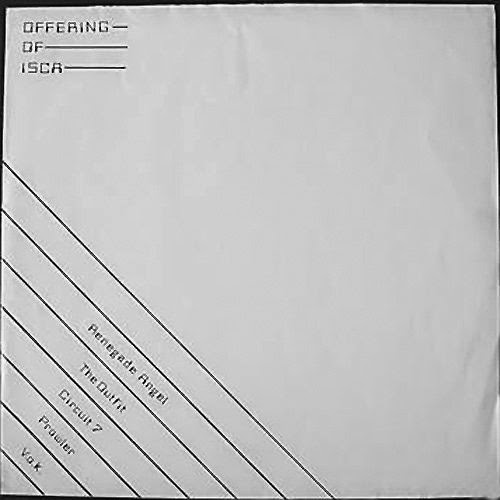 This extremely rare compilation with an extremely unassuming cover did not really raise any eyebrows among the NWOBHM collector scene until relatively recent times, when someone actually came to know there were some Heavy music to be found there. But it was always a sought-after artefact for obsessive collectors involved with Krautrock, Synthpop, Minimal Synth and similar subdivisions of electronic music - something that, coupled with the undeniable scarcity of the LP, rendered it a very expensive purchase with outlandish prices being asked every time it cropped up for sale. Produced and compiled by Circuit 7 member Martyn Good (also one of the partners in Micro Records, or so it seems), "Offering of Isca" is a fair-balanced compilation when it comes to the most prominent musical genres at the time - there's at least two bands sure to appeal to the NWOBHM enthusiasts (maybe three, if you're a more broad-minded collector), so it's more than justified that I drop a few lines about it.

Renegade Angel's "Hell's Let Loose" is a good enough tune indeed - a mid-tempo track with a driving rhythm and distorted guitars reminiscent of none other than Venom (I kid you not). But don't think we're talking of some Black Metal wannabes around here: it's much more of a Hard Rock-Heavy Metal collision (it even reminds me of Silverwing's "Rock and Roll are Four Letter Words", for instance) that sounds quite amateurish most of the time, although I tend to think it adds charm to the track rather than ruining it. "Classic Offender" is slower and heavier, sounding a bit like Shock Treatment's "Nuclear Warfare" (more dedicated NWOBHM addicts will know what I mean) but still keeping the not-really-professional vibe of the previous number. The final section of the song is more forceful though, trying to give a dynamic feel to the composition, with acceptable results. Not bad really, and Renegade Angel is surely a welcome inclusion into the realms of British 80s Metal.

Prowler is quite an overused name when it comes to NWOBHM, but this is yet another one, being unrelated to all the other ones a NWOBHM addict could number. "Sanctuary" is perhaps the best song of the entire compilation when it comes to Heavy Metal: a reasonably forceful song with simple-but-good riffing and some more sedated parts, specially at the chorus. It reminds me of bands like Sparta and Sabre, being a pleasant composition as a whole - it could have been included in some of Ebony's compilations without being out of place, for instance. I would completely agree with the guys from Corroseum on "Murder & Revenge" though: this one is a very basic hard rocker that actually seems closer to Stooges and New York Dolls than anything more Metal-related. Markedly inferior to the other song they deliver here, but still worthy of a spin or two, I suppose. 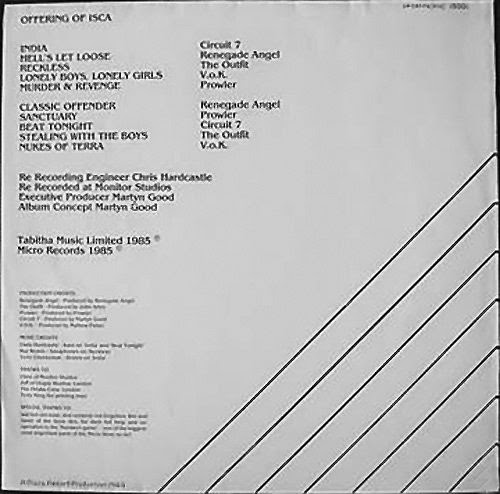 Of the other bands featured, The Outfit's "Reckless" is the closer we'll get to Metal territory around here. The guitar work is OK, and the composition reminds me in places of more poppy moments from undoubtedly NWOBHM bands - a bit like Midas' "Can't Stop Loving You Now", just to give you an example. More charitable Metal addicts may even enjoy it (I indeed enjoy it a little, to be honest), but there's a sax making a solo where a guitar should be, so don't get too over-excited about it if you are a purist. "Stealing with the Boys", on the other hand, is a strange Reggae-Metal type of tune (I tell you no lies) where a surprisingly strong chorus appears coupled with yawn-inducing Peter Tosh-like instrumentation in places. It's difficult to make a strong opinion on this song, but I guess most long-haired metalheads would discard it straight away. Personally speaking, I actually kinda like it, so The Outfit gets out with a not-really-convinced but still sincere thumbs-up, just to acknowledge their good guitar work and their will to experiment.

Circuit 7 is a synthpop outfit with more than a passing resemblance to Kraftwerk - needless to say, not exactly a winning formula if you want to capture the heart of a Heavy Metal fan. That said, "India" is slightly interesting, as it seems to have some influences of progressive rock in its structure - although the faceless (and tuneless) vocals leave a lot to be desired. You're unlikely to listen to it more than once though, and "Beat Tonight" is actually pretty risible even for electronic music standards, I guess. The least interesting band here by a long stretch, at least in my honest (but perhaps unfair) opinion.

Finally, we can succintly describe V.o.K. as a surprise package. You can easily live without ever listening to "Lonely Boys, Lonely Girls" unless you are a dedicated Minimal Synthpop collector, but "Nukes of Terra" is a major improvement - even being miles away from a Metal song, it's actually one of the most enjoyable compositions of the entire LP! Its post-punk, near apocalyptical atmosphere works very well and the chorus sticks to your mind in no uncertain terms. It's not a surprise to know that most electronic music collectors want "Offering of Isca" because of this single track, as it's easily the most unique and accomplished composition of the LP, and a remarkably strong offering (sorry about the pun) from such an unknown outfit. It really makes you wonder what these guys could have become if this song was the A-side of a proper single from a more high-profile label... A surprisingly good composition indeed, even more when you compare it to the other (very weak) contribution of V.o.K. here featured.

Needless to say, the bands who took part of "Offering of Isca" disappeared out of sight pretty soon after the LP was issued, with most musicians involved giving up on being rock stars and having (hopefully) very happy and wealthy lives away from the music scene. Circuit 7 was the most stablished band at the time, with two singles released in 1984, but they seem to have become history not long after that - though an LP of archive material called "Video Boys" was released as late as 2009. All the other bands plunged into oblivion after "Offering of Isca", with no individual releases or further compilation appearances before or ever since. Quite surprisingly, Renegade Angel decided to return from the wilderness at some point: they made a comeback gig in 2010 and created a Facebook page to keep those interested informed of further developments. Sadly, there's no updates since 2012, which tends to suggest they decided to lay the band down to rest once again - but let's hope for some further movement from the lads in the not-too-distant future. 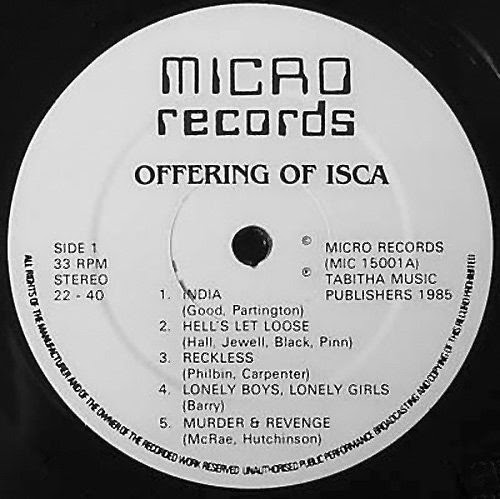 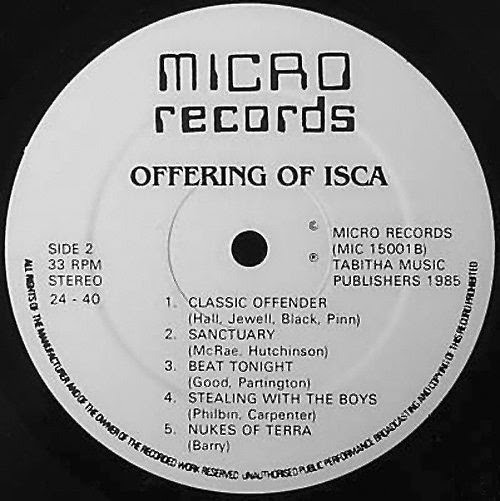 Extra thanks to Renegade Angel for picture scans!

Have you been involved with any of the bands mentioned here? Have any extra info and/or corrections? Please e-mail me at drequon@gmail.com and let me know!
Postado por Drequon às 10:58