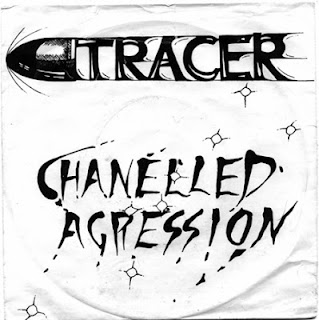 
The Channel Islands are probably a very depressing place, judging on the NWOBHM legacy they launched upon the big bad world. The more well-known - and musically very enjoyable - Legend are a prime example of contemplative (sometimes even gloomy) Metal, although they were more than happy to deliver some fast-paced music on numerous occasions. On the other hand, Tracer (based on the isle of Jersey, as far as I know) seemed to have been a much more doom-oriented proposition. To be honest, their "Chanelled Agression" independent EP from 1983 (and yes, both words were mispelled by the band) is not filled with Sabbath-like riffs or very largo tempos, but their morose, mournful approach on music is more than evident. The reverse of the picture sleeve is very explicit, showing the lads in a not-really-happy-at-all posing, subtitled by the ominous statement "There's no end in sight, no winners in this fight". Their lives must have been such a drag back then, uh?

After a somber, climatic intro, "Don't Bless the Warrior" launchs into a reasonably heavy assault, albeit with a very simple structure - not helped by the very poor production, as sometimes is nearly impossible to really understand what's going on. The lyrics are very depressive, as in the following song "Memories Always Kill" - a extremely melancholic semi-ballad apparently written when the lads were in a very miserable frame of mind.

Unfortunately, I'm working with a mp3 capture of the EP that misses the last song, "Neon Town", so I won't be helpful to enlighten any of you good people on what this specific song is all about.  The last song I listened to was "Pain, Pain", another very simple song - almost ramshackle in places, to be honest - with a more upbeat rhythm but equally dreary lyrics, incluiding a sorrowful chorus that really drags the message along in a not-remotely-subtle terms.

All things considered, "Chanelled Agression" shows some hints of promise, but everything is much too raw (and, to be honest, sometimes even immature) to really set any pulses racing. Singer Ron Laity seems to have had some genuine potential, though, and I can't help but wonder how would his voice develop through the years, given the chance. It seems that the very obscure (in more ways than one) Tracer managed to release a demo in 1984 or 1985, with five new songs (namely "Nightstalker", "City Lights", "Blinded By a Lie", "Shoot Out the Lights" and "In the Heat of the Night") which Malc McMillan describes in his NWOBHM Encyclopedia as slightly more upbeat than its EP predecessor. Considering that it would be life-threatening to be less upbeat than their vinyl release, I guess it was all for the best.

After a few personel changes, ignited by the departure of drummer Nigel Amy in 1985, Tracer seemingly lost the will to continue, possibly coming to terms with the fact that they would probably never reach any kind of success in mainland England with such a depressive kind of music. That's actually too bad, as I would like to have seen them soldiering on for a little longer - maybe they could have had a better chance alongside bands such as Cathedral, Anathema and Paradise Lost, who knows? Not that they ever sounded like them (actually, not at all) but at least their gloomy efforts wouldn't be too out of place. Unfortunately, apart from bassist Mark Daghorn - that joined melodic bands such as The Avenue and Various Areas at the turn of the decade - all other musicians seem to have left the music scene behind them for good, leaving this (very rare) 7'' as the sole memento of their fleeting career.


Have you been involved with any of the bands mentioned here? Have any extra info and/or corrections? Please e-mail me at drequon@gmail.com and let me know!