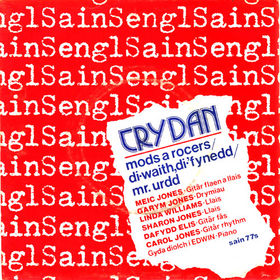 Not much (well, nearly nothing) is known about this Welsh-singing band, whose sole vinyl offering to the world seems to have been this 3-track single from 1980. One of the most obscure bands from the Sain catalogue, Trydan was a kind of uncommon formation, featuring three singers and six members in total, three of then being gentlemen and three ladies. Four of the musicians share the same surnames, possibly being members of the same - and kinda large - family. After some research, I couldn't find these musicians involved with any later (or earlier) bands, so it's reasonable to believe that Trydan (which translates as "Electricity", by the way) was their one and only collective claim to fame - well, musically at least.

For the most dedicated Heavy Metal fans, "Mods a Rocers" will undoubtly be the main (in fact, only) focus of attention, this being easily the most hard-rocking number on display. Seemingly portraying a Quadrophenia-like gang fight, this song opens with a typical police siren wail and soon evolves into a pretty straightforward semi-NWOBHM tune, with basic riffing and a fairly catchy (yet very basic) chorus. Not a memorable song, really, but it does considerably better than “Di-waith, Di-‘fynedd” and “Mr. Urdd”, which comprises the B-side of this vinyl obscurity. The first one is a mellower number with a extremely simple (almost ramshackle, to be honest) song structure and kinda messy vocal arrangements. I understand that the singing ladies were meant to harmonise and enhance the lead singing from mr. Meic Jones, but I guess it just didn't work out as planned, sorry. The bass lines are not bad at all, though. On the other hand, "Mr. Urdd" is a bit of a throwaway track - it has a pleasant piano line, i'll concede, but nearly nothing else. It takes one-and-a-half minutes to disappear in complete oblivion, never to be heard again.

It seems to me that Trydan were little more than a bunch of really young fellas, who decided to join forces and have a bit of fun playing some hastily assembled songs for the sheer joy of it. As Welsh-language music (and mostly heavy music) was always in a shortage of new bands, Sain were kind enough to give them a chance - something that, to be point-blank honest, they simply didn't deserve just yet. Maybe with a few (or many) more months to put their minds into writing and polishing some good songs, they could have done way better. The way it actually came to be, though, Trydan's sole single are little more than a borderline-heavy curiosity, that would be condemned to forever rest in bargain bins if not for a few NWOBHM completists, who shown interest in buying this nonspetacular single. I believe to my soul that every piece of vinyl deserves a place to call home - so, if you ever see this 7" (housed in a pretty basic cover, the generic art that Sain used for its less spetacular single releases) at a cheap price, give it a chance, would you? You won't listen to it much often, but oh well, it's a pretty rare one anyway. 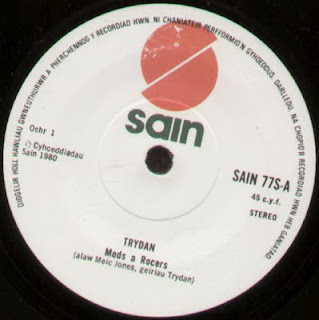 As a trivia, another Trydan appeared from the same area in recent times, with a musical style near to modern bands such as Creed and The Darkness. Still, the today's Trydan presents musicians around the 15-year mark, so don't make any confusion with their (long gone) NWOBHM namesakes.


Special thanks to Strappado Metal Blog for MP3 files