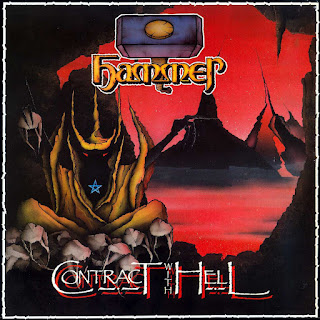 After releasing the adequate-but-not-memorable "Early Warning" LP in 1984, english band Holland found themselves in the verge of a potential legal battle, as a Canadian band using the same monicker threatened to sue them in the grounds of copyright infringement. Instead of launching into a fight to keep their original guise, and knowing that Ebony would release their second album no matter what, the musicians involved decided to simply adopt a new name, Hammer - a change that led to a more forceful imagery, a more metal-looking logo and a few (and welcome) musical changes as well.

In fact, "Contract With Hell" was first meant to be Holland's second album, but it actually came to achieve an undeniable spell of personality. The musicians were all the same (although vocalist Marty Wilkinson, a.k.a. "The Dog" or "Doggy", assumed keyboard duties as well) and it's not like they became a different band altogether - but they were seemingly aware that this enforced name change was also a chance to take their music to a new direction, more akin to the true-Metal feel of near all releases from Ebony. And they sound a hell of a lot more confident (and a whole lot better) than before, believe me.

The opening song, "Caution to the Wind", sums this all up perfectly. Carried along in a very forceful manner (it even reminds me a few Melodic Power Metal bands from Germany), this song has it all: nice keyboard intro, heavy guitars, captivating song structure, uplifting lyrics, impressive vocal performance and a simple-yet-memorable chorus. Awesome. 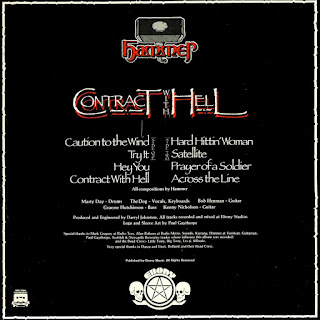 Nearly all the songs are very good, although it's clear that they were wrote in different periods of time, resulting in a not-really-cohesive (yet very pleasant) mixture. "Hard Hitting Woman", for instance, is a older cut demoed by Holland in 1982, and I wouldn't really be surprised to know that "Try It" and "Hey You" were earlier efforts too, since they sound (as well pointed out by Malc MacMillan in his NWOBHM Encyclopedia) very similar to what these musicians did on "Early Warning" and the keyboards are less apparent here, doing little more than humble embellishments. That said, there's nothing essentially wrong with these compositions, all of them being good enough to please the headbangers.

"Satellite" is not that far from Holland too - but the keyboards are much more proeminent, taking a major part in the instrumentation. I love this song, personally speaking - but I guess that, apart from aforementioned "Caution to the Wind", the finest moments of this LP would be the memorable title track, the intense and poignant "Prayer of A Soldier" and the epic, atmospheric ending with "Across the Line" - all outstanding pieces of impressive songwriting and musicianship. More than enough quality to raise "Contract With Hell" to a very high level in my personal Metalomether - one of my personal favorites when it comes to British Metal releases after 1984, I must add.

It's a shame that Hammer wouldn't last the distance. Guitarist Kenny Nicholson and vocalist/keyboardist Marty Wilkinson had inconciliable differences on what Hammer music should be on later recordings - the axeman wanted it to be considerably heavier, as the singer though that it would be a wiser move to take a much more melodic, lightweight direction. In the end, Nicholson decided to leave Hammer behind, forming a new venture called Fast Kutz.

The remaining musicians recruited Arthur Fixter and demoed severe new compositions in an increasingly softer vein - something that Ebony seemed not to receive very well. They wanted Hammer to release a new album (and they wouldn't allow a change to yet another guise, something that was tentatively hinted at some point), but they wanted the band to sound as heavy as before, something that the musicians were not even considering anymore. 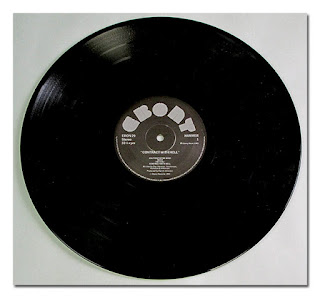 This indefinition led to the final demise of Hammer, - which was really unfortunate, but maybe it was all for the best, as I'm afraid they didn't have their earlier spirit anymore. Perhaps if Kenny and Doggy could find an agreement and stayed together for a little longer we would have more Hammer albuns to talk about. Incidentally, both joined forces many years after in a covers band called Outrageous Wallpaper - though neither of them are doing the rounds there anymore. Guitarist Bob Henman also went to the pub circuit, playing with small-crowd-pleasing cover bands, though I have no news on him for quite a while now.

Very special thanks to Strappado Metal Blog and user Mik for label scans!