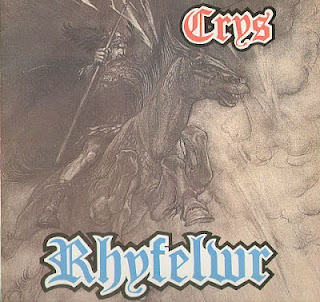 The success achieved by Crys in the welsh-language rock scene after the release of "Lan Yn Y Gogledd" single may have not been exactly predictable, but it was no huge surprise either, as there was not that much competition to beat in the first place. Embraced by a very larger label this time (namely Sain, surely the largest welsh-language music record company ever), they surely had the necessary support to fulfill their early promises and deliver the goods in a full album. Well, 1981's "Rhyfelwr" may not be the pinnacle of Crys' career (the follow-up "Tymor Yr Helwyr" is markedly better, in my humble opinion) but it still represents a good stab at hard / heavy music, being surely a groundbreaking release for the whole welsh-singing scene.

To understand the impact and the relevance of Crys, is important to keep in mind that Welsh-language music has not only a small potential market (less than 700.000 people speak it in the first place) but also a sort of social relevance, as it is a useful resource to keep alive a enduring culture surrounded by english-speaking omnipresence. Not many kids are that excited to learn Welsh as a second language in school, for instance, and many adults may not be bothered to hand the tradition on to their kids. So, Rock N Roll in Welsh (much fresher than the "old" folk music) is a way to keep the young guys and girls interested, and even proud of their inheritance - something that seminal bands as Edward H Dafis understood very well, and a banner that Crys was more than happy to held high along the way.

"Roc A Rol" is the opening number on this album, and it pretty much gives away the kind of music you will listen here. A mid-paced rocker with a very simple main riff and a catchy (but very basic) chorus, it has some interesting features (as the good solo section) but fails to leave a lasting impression, being perfectly forgettable as soon as it's over. Not bad at all; just not that good. A description that could be applied to several other songs on the album (such as "Nos Sadwrn" and "Dyma'r Band Cymraeg", the latter bearing a not-really-subtle 'resemblance' to Grand Funk Railroad's "We're An American Band") without any dramatic changes. "Cân Lis" is slightly different (and better), as it has a more upbeat riffing throughout, but the vocal lines are pretty much more of the same, unfortunately. 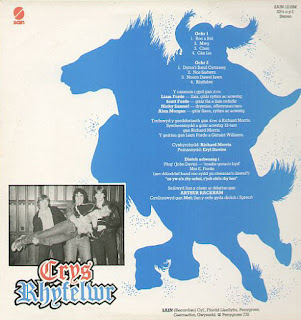 Now to the good stuff. "Mwg" is one of my personal favorites: very nice guitar work here, with some multilayered effects giving the song a very distinct atmosphere. The instrumental "Cnau" is also very enjoyable - not many tempo changes or impressive displays of individual musicianship, but still a confident and inventive piece of music. The best of "Rhyfelwr", though, is the final number: a two-song epic, beggining with the somber ballad "Noson Dawel Lawr" and finishing with the weighty title-track, easily the heaviest song on the whole album. Welsh music is very akin to melancholy, and "Noson Dawel Lawr" captures this kind of feeling to great effect. "Rhyfelwr" comes next, with a bombastic opening and a good mixing of heavy riffing and mellower moments. All in all, a suprisingly well-crafted and adventurous piece of music - which reprises "Noson Dawel Lawr" towards the end, closing proceedings quite nicely.

All things considered, "Rhyfelwr" is a respectable album - not a NWOBHM monster, but a mostly enjoyable listening experience nonetheless. The production is basic, even a bit rough sometimes, but it doesn't really ruin the album in any sense. It's not easy to locate a copy these days, and any CD reissues are highly unlikely - but if you ever see this gothic logo and metal-looking warrior for sale at a reasonable price, give it a try. I guess it more than deserves a chance with any serious NWOBHM collector. 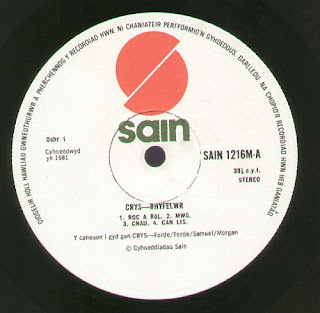 Have you been involved with any of the bands mentioned here? Have any extra info and/or corrections? Please e-mail me at drequon@gmail.com and let me know!
Postado por Drequon às 14:16