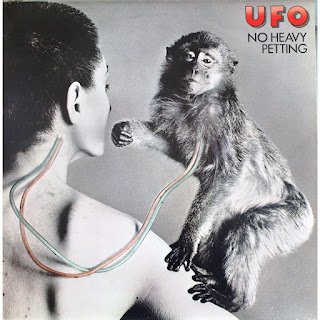 The general response this record received through the years really baffles me, you know. I mean, nearly all reviews to "No Heavy Petting" you can find out there (most of all from the 1970s and 1980s, but more recent analyses too) are at least a little bit dismissive, some actually getting close to ripping the record to shreds - and I truly, sincerely never could understand why. For many years, it was my favorite UFO album; as time went on, "Force it" grew on me to claim number 1 status, and nowadays I guess I'd say "Lights Out" is my favorite studio LP from the band. But I still think "No Heavy Petting" received a lot of unfair criticism through the years: it's a pretty strong set of compositions IMO, and it also signalled a step in the right direction for the lads, showing UFO to enrich their sound to a great extend and with mostly very pleasant results.

As I believe most of you are aware, the Mogg-Way-Parker-Schenker nucleus were looking for a fifth member at the time, and the good results achieved with the use of keyboards in previous record "Force it" strongly hinted that this was the route to go down. After some consideration, UFO decided to recruit Danny Peyronel, a keyboardist born in Argentina that had enjoyed some quality time with Heavy Metal Kids previously. Some critics say that Peyronel never really clicked into the band's set-up, his contributions being mostly obstrusive to the overall sound of UFO - a notion that may be essentially true (it would be his only album with the band after all), but that I feel to be somewhat at odds with what we can hear on the album itself.

To my hears, "No Heavy Petting" shows UFO as an increasingly stronger entity, sounding more cohesive and confident than ever. The band's performances are sterling throughout, most of all from Michael Schenker and Phil Mogg. The latter's singing is top-notch here BTW: not the most technically gifted delivery you'll ever hear perhaps, but his sense of interpretation is close to perfection, balancing the necessary heavy rock energy with healthy doses of emotion that would make some bluesmen proud. In a sense, I always felt Mogg was something of a crooner, instead of the typical hard rock singer, and giving this LP a few listens may provide some solid evidence on that. As for Mr. Peyronel's presence, I feel he does a commendable job here, adding interesting layers and ambiences without trying to be too much on the foreground. He also shows himself to be a good songwriter, you know: two of his contributions, the boogie-rocking (but still peculiarly charming) "Highway Lady" and the intense, atmospheric final ballad "Martian Landscape", sit easily among the best songs on this LP, and he also lends a hand in "Can You Roll Her", which is also not a bad tune at all.

I know this review is becoming something of an apology, but I also need to address the supposedly repetitious nature of most songs - that, according to detractors, were more of the same when compared to "Force It". Oh well, I wholeheartedly beg to differ. I'm not at all convinced that compositions like the heavy, almost doomy "On With the Action" (the solo from Schenker on this one has to be heard to be believed), the straight-to-the-point "Reasons Love" or the aforementioned "Martian Landscape" are indications of stalled creativity in any sense, and the heartfelt "I'm a Loser" may be one of the best things ever written by the band, and I mean it. OK, the band already did have a lot of hard rocking ditties under their belts, but "Natural Thing" is nearly unsurpassable on the field: an opening riff to die for, with obligatory double-meaning lyrics, a far-from-obvious chorus and soaring guitar licks all over the place. It's no surprise that it would become a recurring opening number on the band's setlists for many years afterwards.

I would agree that "A Fool in Love" was a mostly uninspiring addition (the song, penned by ex-Free stalwart Andy Fraser, would later be successfully re-recorded by Delbert McClinton), and that the extremely serious, almost solemn ballad "Belladonna" does not seem to have survived unscathed the test of time: I enjoy listening to it, you know, but its lack of perceivable variation may be a bit difficult to some tastes. But I suppose most of the criticism towards "No Heavy Petting" comes down to album sales in the end: this one didn't sell, so everyone involved with it would regard it as a substandard effort, and the notion would be perpetuated in the years to come. Excuse me, but I beg to differ: "No Heavy Petting" is a great record, in the same league of the most well-regarded releases of UFO, if not better than most of it. Give it a try with an open mind and without prejudgements and perhaps you will like it a hell of a lot. And if you don't, please take a few minutes of your time to tell me why, as I simply can't understand what is supposedly so crappy about it.