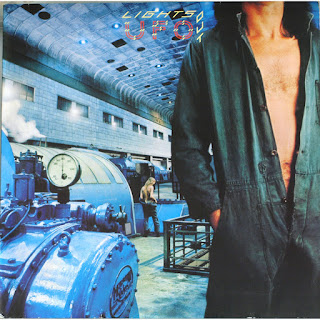 NOTE: This is the first UFO review I (re)write after the sad demise of legendary Pete Way in August 14, 2020. Not that I can add much to the massive (and thoroughly deserved) amount of love and admiration outpoured by the rock/metal community since his passing, but I would just like to take a moment to say that all UFO reviews from now on will be a personal homage to him, one of the guys that really made a difference in my personal liking of heavy rock music (and I'm glad to have Steve Harris by my side on this). Thanks for all the music, Pete, and may your soul forever rock in peace. I'll drInk to that!

Widely regarded as the best studio album ever recorded by UFO (and, according to some, the only truly classic offering from their long and convoluted career), "Lights Out" is indeed a great record, but one that caused me contradictory feelings for a while. In a sense, I still feel UFO never recorded their truly quintessential LP: the band's releases are mostly very good, but there never was that stand-out record, the crowning achievement able to emcompass all their fundamental features in the most positive light (I have a somewhat similar feeling about Iron Maiden BTW but... let's not rush things). For me, "Lights Out" always sounded like an excellent, but slightly flawed record in places, and I still hold pretty much the same opinion today - but, as years passed by, I kinda reached the conclusion that yeah, this is UFO's best studio offering after all. Which means I also had to come to terms with the fact that a recording facility is not a rock venue, and that's precisely the reason why "Strangers in the Night" will forever be the pinnacle of UFO's career (more on that later, hopefully).

The recruiting of Paul Raymond (formely with Savoy Brown and Danny Kirwan, and another guy that left us way too soon if you ask me) to substitute Danny Peyronel was a wise move, as his versatility with both keyboards and rhythm guitar opened a lot of new musical avenues for UFO to explore. His arrival was all for the best really, and it should come as no surprise to learn that "Lights Out" is one of the most experimental and adventurous records in the group's canon. With a new player of such calibre, it's only natural that one would want to explore what things could our could not be done, and UFO did exactly that.

This inventive mood also had a lot to do with market concerns, I suppose. It's clear for me that UFO were trying to find their big hit by this point, the song that would chart high enough to bring the elusive commercial success they were striving so hard to achieve with no tangible results. Nothing fundamentally wrong about that of course, but I think that explains the tendency to soften things up that marks "Lights Out". There are lots of acoustic parts, neat string arrangements and multiple layers of melody to embellish the songs - something that works beautifully in the context of some songs, but also tends to erase some of the usual energy and heavy groove of the band. Michael Schenker seems to be the one who suffers the most in such scenario: his solos are as kickass as ever, that's for sure, but the diminished heaviness results in a pitifully small percentage of bona-fide riffing, which is quite a waste when you have such a strong riffmaker plugged in the band's Marshall amps.

They still rock, granted. The title track is arguably the closest the band ever got to full-blown heavy metal, with some truly impressive guitar work and clever lyrics about the bombing of London during WW2 - not to mention a muscular, hard-hitting drive that will set most headbanging necks in motion in a matter of seconds. "Electric Phase" is a less galloping effort, but it also brings some healthy heaviness to the table, and "Too Hot to Handle" is a singalong hard rock ditty if I ever heard one: the baffling fact that it never threatened to conquer the charts (despite definitely deserving to do so) comes as strong evidence that the universe didn't wanted UFO to be hitmakers after all. But the songwriting is pretty much stellar overall, and the relative lack of in-your-face heavy rockers doesn't mean the listener will be let down in any sense. How can one not be moved by "Just Another Suicide", an extremely inventive piece of music where countless layers are perfectly put together for great effect? How can anyone say a bad word about "Love to Love", a marvellous epic ballad with impressive arrangements and a unique atmosphere throughout, without having his mental condition seriously put into question? Even a somewhat less memorable number such as "Gettin' Ready" has a lot to offer to the more inquisitive listener, fusing some old-school-rock edge with sensitive, even poetic subtleties.

It's not a flawless record by any means: I can't help but feeling that the sedated ballad "Try Me" didn't aged very well, and I could have lived without Love cover "Alone Again Or", no matter how groundbreakingly good the original actually is, or how decent UFO's rendition turns out to be. But these are but minor shortcomings in a otherwise near perfect record: "Lights Out" is an album you really should have if you want your record collection to be a respectable one. More straightforward records like "Force It" or even "No Heavy Petting" will probably offer you a better picture of the landmark UFO sound and vision, but when it comes to a package of great songs, I guess this one is the real deal - at least when it comes to studio releases, of course.