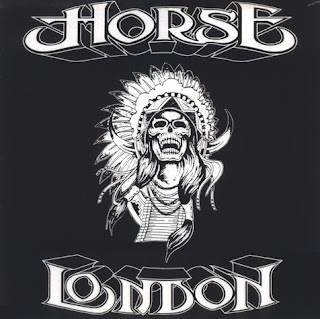 I must admit I don't know much about the history of this London combo, at least not enough to write a comprehensive article about them. Still, it seems they started doing the rounds in the final months of 1987, featuring members from then recently-deceased (and now long forgotten) glam rock bands Aunt May and Cosmic Groover. A demo called "Screwed, Blued and Tattooed" was issued sometime the following year, and it seems the band were still using the slightly simpler name Horse by this juncture - soon augmented to the more recognizable Horse London, to differentiate themselves from a Scottish pop group that also happened to have a thing for ungulates, or something. They were obviously seen by many as a reasonably strong prospect at the time, and Chrysalis felt there was enough mileage to justify signing the lads to their Wild West imprint, which almost immediately led to some recording sessions (produced by much in-demand Guy Bidmead) and all concurrent preparations for a mini-LP.

Some reference sites name the record as "Diesel Power", but they are most certainly mistaken, as this was in fact the fantasy name created by the band to co-license the release. Despite the glam origins of their members, Horse London's eponymous release was firmly rooted on early 80's British Metal, even reminding some like-minded contemporaries such as Marshall Law and Panik Attak in places. But it's surely a slightly sleazier, more hard-rocking approach to the formula, keeping thing mostly very simple and even hinting of some punk influences here and there (the drum pattern right at the start of "Wheels in Motion" could easily be on a Ramones song, believe me). I'm sure they were listening to a lot of Mötley Crüe at the time! The voice of Gary Gene is perhaps the strongest link to glam rock around here, but I wouldn't say he sounds out of place at all, as the vocalist is more than capable to bring aggression and energy to the equation when needed. 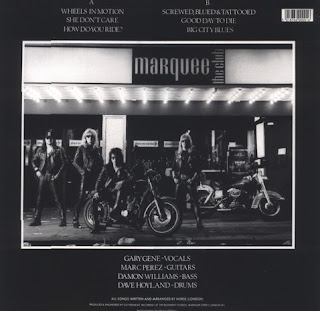 Of the six songs here featured, my personal favorite would be "Screwed, Blued and Tattooed", with a pinch of Motörhead in the instrumentation and a let's-sing-the-name-of-the-song chorus that actually works quite well in this particular context. "Wheels in Motion" could have been a song from Silverwing / Pet Hate if they were trying to be a tad more metallic, and it's also good fun if you ask me, and "She Don't Care" presents a predictable, but very functional chorus, not to mention a pretty nice guitar solo. "How Do You Ride?", on the other hand, could have been a punk rock song if given a different arrangement, being perhaps a bit too basic and unpolished for its own good, I'm afraid. "Good Day to Die" reminds me a little of Russ Ballard's "Riding with the Angels" (no, I don't know where these comparisons are coming from), but the punkish chorus gives it a raw touch miles away from any radio-friendly heavy rock, and final track "Big City Blues" is a bit of a throwaway track to be honest, a second-rate attempt to blues-rock that doesn't rate that high on my Metalometer, but nevermind. All things considered, "Horse London" (the album) is a pretty decent record: not a contender to world domination perhaps, but its down-to-earth vibe is quite reassuring, and those partial to a bit of glam metal to go with the daily ration of NWOBHM are likely to give it a spin or two from time to time.

The record didn't exactly set the world on fire upon its release, but it's fair to say the response was mostly positive. Although the Wild West subsidiary was discontinued soon after the mini-album hit the shelves, Chrysalis seems to have considered keeping Horse London as part of their roster, and none other than the mighty MCA apparently followed the band's activities for a while. But times were changing and, as we all know by now, the alternative/grunge wave soon meant that everything remotely resembling old school metal had become a thing of the past. With no further contract offers coming their way, Horse London simply wasn't strong enough to survive the changing tide, and had bitten the dust for good in early 1991, at the very latest. I have no idea what happened to the musicians after this, though singer Gary Gene is said to have been involved with a short-lived venture called Righteous, alongside former Tank/Samson drummer Mark Brabbs. If you happen to have any enlightening information about Horse London's history and offshoot bands, you're more than welcome to get in touch!

Thanks a ton to Discogs for sleeve and label scans! 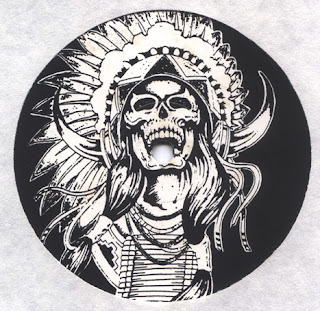 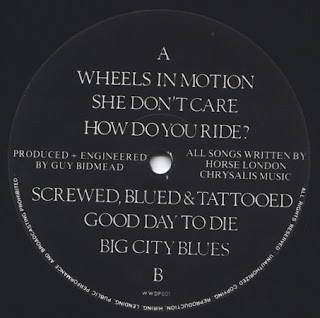 Have you been involved with any of the bands mentioned here? Have any extra info and/or corrections? Please e-mail me (drequon@gmail.com) and let me know!
Postado por Drequon às 14:57