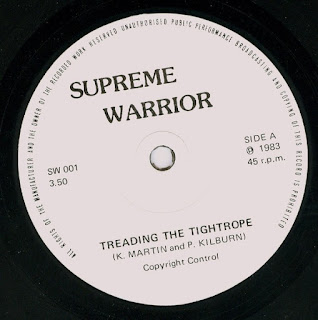 This combo, hailing from the towns of Southend and Basildon in Essex UK, are a relatively recent discovery to the collecting scene (more widespread mentions to the band dating from the early 2010's at the very earliest), and even the extremely comprehensive NWOBHM Encyclopedia by Malc McMillan failed to notice the existence of their sole 7'' single, which comes to show just how much of an obscurity they were (and still are). Not surprisingly, there's not a huge deal of info regarding Supreme Warrior to be reported, apart from the songwriting credits to Keith Martin and Phil Kilburn and some snippets of history here and there. They were seemingly a trio, with a drummer who also performed vocal duties (in studio, at least), and pressed around 500 copies of their 1983's "Treading the Tightrope" two-tracker, allegedly selling it only at their live jaunts - that, surprisingly, reached as far as London on two or three occasions. I'm not entirely sure it's all truth, though, as there would presumably be more copies doing the rounds if it was the case (only a small handful ever surfaced, as far as I'm aware) and it would hardly take nearly 30 years for everyone to find out they ever existed. Perhaps most copies were never sold at the time and are now stacked in someone's attic waiting for ardent collectors (that would be really nice BTW), or maybe it all just managed to escape everyone's radar by some bizarre chain of unlucky coincidences, who knows. Whatever the story, it was indeed recorded at (now long gone) RingTrack Studios in Southend-on-Sea and mastered at DeLane Lea Studios in London (yeah, seriously), so it's undoubtedly an artifact from the period in question.

"Treading the Tightrope" is actually quite an unusual piece of songwriting, a mid-paced number with peculiar (not really complex, just slightly off-the-wall) song structure and loquacious (not to say almost verbose) lyrics. It's difficult to provide meaningful points of reference on this one, as it's pretty dissimilar to almost all the other metallic acts of the period. Someone once told me (before I had the chance to listen to the record myself) that the song in question was something like "a heavy metal Steppenwolf", which is quite odd a comparison indeed, but it's not that far off the mark if you ask me - if you keep the "Born to be Wild"-ish Steppenwolf in mind, that is. It reminds me also of some heavier cuts from Jameson Raid ("Titanic" and "Do It the Hard Way", for instance) and maybe Pali Gap's sole 7'' single, but we're still not quite there yet. There's something Phil Lynott-ish on the way the lyrics are sang, but not with the bard-like intonation the Irish rock poet was known for, being more gritty and crude for the most part. The production values are very primitive, with guitars seemingly plugged straight into a sound system from someone's living room or something, and some rough edges in instrumentation are more than evident - but I'd say it actually adds charm to the track rather than weakening its delivery, contributing to the very peculiar impression left by this unique track. I like it actually, and it comes as strong evidence that some truly obscure NWOBHM bands were head to head with the big boys of the scene when it comes to songwriting ingenuity.

"Mad and Cynical" is a more straightforward ditty, carried along by a near omnipresent main riff that is something of a dirty, almost sickening variation on Tygers of Pan Tang's "Suzie Smiled", if such a bizarre comparison makes any sense whatsoever. It has a more street-level attitude than the somewhat figurative A-side, and the song structure is also more easily comprehensible, though there's a bit of tension-building halfway through that one would hardly expect while listening to it for the first time. It doesn't achieve the same levels of musicianship from the very good "Treading the Tightrope", and the rough-and-ready vocal performance doesn't work that much in benefit of the song this time around, but it's a pretty decent song all the same, and repeated listens further enhance Supreme Warrior's position as one of the most worthwhile NWOBHM-era discoveries in recent memory.

No copies of this very elusive piece of wax were ever issued with a picture sleeve as far as I'm aware - I actually saw online a demonic visage embellishing one copy a few years ago, but I'm pretty certain it wasn't part of the original package, most probably being manufactured at a much later date for means of making it look better and/or defraud potential buyers. Supreme Warrior's lifespan seems to have been very short anyway, and I strongly suspect they finally disbanded in less than a year after this 7'' was pressed, as there's precisely zero mentions to any further activities anytime, anywhere. Being realistic, and unless the proverbial box of unplayed copies we all always dream about becomes true in this particular instance, the chances of holding an original copy in your hands are very slim (assuming you don't own one already, that is!), and it would take obscene amounts of moolah to add this one to your collection, so I guess we will all have to do with the mp3 files ripped by some truly enterprising individual (thanks, unknown mate) for the time being. As always, you're more than welcome to drop us a line if you happen to know more about Supreme Warrior, and any help on that matter would be greatly appreciated.

Have you been involved with any of the bands mentioned here? Have any extra info and/or corrections? Please e-mail me (drequon@gmail.com) and let me know!
Postado por Drequon às 12:50