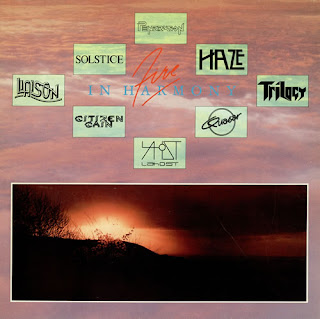 As any serious NWOBHM collector probably know damn too well by now, you have to keep an open mind in order to make some discoveries. Sometimes, a truly metal-looking combo and/or record turns out to be nothing of the sort (examples abound, and some were already mentioned at this very space), but sometimes it's the exact opposite, with some interesting finds waiting for you on truly unpredictable places. And sometimes your reward may be not as skull-crushingly heavy as one perhaps would expect, but you'll still get some interesting music with reasonable crossover potential and decent amounts of replay value, which is already a good thing if you ask me. "Fire in Harmony" was one of the very first releases from Elusive Records, an imprint from EMI conducted by Marillion's then-manager John Arnison and devoted to release new talents in the prog rock field. As you probably would have guessed by now, it's not a heavy rock sample by any stretch, and I'm sure those responsible never planned for it to be taken as such. Though surely more suited for the progressive rock fraternity, it's also a mildly interesting item for NWOBHM aficionados, as it presents an exclusive number from Liaison (a much-loved borderline act that appeal to both long-haired rockers and prog-heads), and there's also a fair percentage of pretty decent (though not astonishingly heavy) music to be heard within its grooves.

Pendragon's "Fly High, Fall Far" opens proceedings in very melodic fashion, though slightly forceful rhythm guitars and a more upbeat chorus keep things lively enough. These lads never had much (or anything) to do with NWOBHM musically, but their arrival to the scene happened pretty much in the midst of the British Metal resurgence of the early 1980's, a fact that garner them sympathy from many headbangers back in the day. It's an interesting, reasonably engaging number, and easily one of the most (well, slightly) heavy-rocking tracks on the entire record. Next comes Haze, another act close enough to the NWOBHM archetype to be regarded as something of a near-crossover act - it even makes an appearance on Malc McMillan's NWOBHM encyclopedia, which comes to show their not-so-tenuous links to the original explosion. That said, their "Shadows" effort didn't really strike the right chord with me, sounding like a confuse attempt to put many separate ideas together in a rather dramatic 5-minute song. Some parts remind me of Jethro Tull in their "Thick As a Brick"-ish, most histrionic moments, while others are closer to the most contemplative, keyboard-based atmospheres penned by (yeah, you guessed it) Marillion, and the efforts made to tie such disparate loose ends are not entirely successful, I'm afraid. An ambitious number for sure, but I guess it just wasn't ready to be committed to vinyl just yet, and you can rest assured that Haze did way better on many of their multifarious independent releases.

Easily the main focus of attention for those obsessed with the NWOBHM, Liaison's "A Tale of You" may be a bit disappointing to some, as it's a featherweight, slow-moving track with languid guitars and strong use of keyboard ambiances. The rhythm section pretty much keep things going and not much else, and we're nowhere near the upbeat, catchy territory of more recognizable compositions like "Play it With Passion" or "Only Heaven Knows", to name a few, so this 7-minute-plus journey may not be exactly what die-hard metalheads are looking for. Still, it moves forward with undeniable elegance, and I suppose that submitting it was a conscious choice, so they wouldn't be too out of place among the other neo-prog combos on display. It's decent enough, but not a groundbreaking number by any stretch, and those willing to learn more about Liaison are well advised to start somewhere else, as this one may leave an inaccurate first impression of the band's output. To close side one of this LP, Trilogy brings "Hidden Mysteries", a surprisingly dynamic and enthusiastic song that is one of the most interesting inclusions by far. This competent combo seemed to know exactly how to balance the usual subtleties of the genre with a much-needed hard-rocking vibe, and this varied composition (further enhanced by excellent guitar work) really deserve a careful listen or two from more broad-minded collectors. Well done, lads.

Side 2 of the LP starts with Solstice's "Peace", a soft number that moves perilously close to new wave mediocrity in places, but fortunately sounds more like a extra moody version of Renaissance overall. It gets a tad more intense in the final section, but it's mostly fairly sedated, with female vocals that, albeit slightly shrill when reaching for the higher notes, are pretty effective for the most part and really carry the song along well. Citizen Cain is next in line, and they're perhaps those more keen to experiment with tempo changes, unusual time signatures and so on. Their "Unspoken Words" effort is really convoluted in that sense, taking repeated listens to fully grasp their highly unusual song structure and very busy instrumentation. The singer lacks range and versatility, being easily the weak spot on this one, but it's such an adventurous and competently crafted composition that I'll stick my neck out and say it turns out to be the best song out of the whole package. The influence of Rush is unmistakable, but it's actually an accomplished piece of songwriting with merits all of its own: let's face it, it's no easy task to write such a relentless, yet almost easy-flowing track, most of all when you're youthful, inexperienced newcomers to the scene. It surely deserves way more attention than it seems to have received at the time of its release, if you ask me.

After such a pleasant surprise, La Host is something of a letdown, their "Blood and Roses" contribution being quite a mess, if we're to be point-blank honest here. They were sure eager to experiment with krautrock, electronic elements and so on, which is not a bad thing in itself of course, but really needs to be in service of coherent songwriting to have the right effect. In fact, my first impression was to be listening to a teaser rather than a proper song, with snippets of different pieces put together to advertise an upcoming album or something. Repeated listens made "Blood and Roses" slightly more comprehensible, but it's still too much of an oddball for comfort, and I reckon most heavy rockers out there won't be missing much by not bothering to track down this one. Final track is "Fire in the Sky" by Quasar, another female-fronted proposition (the singer actually reminds me of Geddy Lee, go figure) that discreetly flirts with new wave, but ultimately (and wisely) choose to keep their musical landscapes into the realms of neo-prog safety. The song is divided into two very distinct parts: it starts with a more hard-edged approach, being even reasonably heavy in places, then metamorphosing into soothing, ethereal parts that counterbalance the previous adrenaline flow. Some rough edges are audible in a few transitions, but the track as a whole is pretty decent and I've no doubt that most prog rock addicts (and some like-minded metal fans) will enjoy the ride. 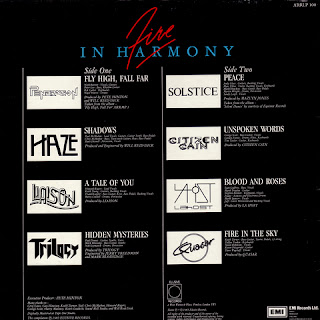 When it comes to listening enjoyment, "Fire in Harmony" was a mostly pleasant and worthwhile experience, and it was a handy piece of exposure for most of the participants as well. Pendragon had already signed the dotted line with Elusive by the time the compilation LP was out, and went to enjoy a mostly successful career that goes on to this day (and that will most probably be further mentioned here in due course), while Quasar, Solstice and Citizen Cain would also release a number of individual records in later years. Though never snapped by more established labels, Haze managed to maintain quite a hectic working ethic, putting out a myriad of independent releases (most of it originally on cassette format only), not to mention a truly complex family tree with countless offshoot projects that would take us a full article to properly explain (again, kindly watch this space for further developments in the not-too-distant future). Unfortunately, the immensely enjoyable Liaison would not last for long after "Fire in Harmony" was out, and we keep our fingers crossed in hopes for a retrospective CD/LP to come out in the future, as they sure have enough recorded material and their collective talents damn sure deserve it. LaHost also failed to last the distance, but a collection of unreleased tracks came out as early as 1992, while Trilogy (a very talented bunch, as above stated) were inexplicably ignored by record labels and disappeared towards oblivion in a matter of a year or so, which was a total disgrace if you ask me.

Have you been involved with any of the bands mentioned here? Have any extra info and/or corrections? Please e-mail me (drequon@gmail.com) and let me know!
Postado por Drequon às 17:18