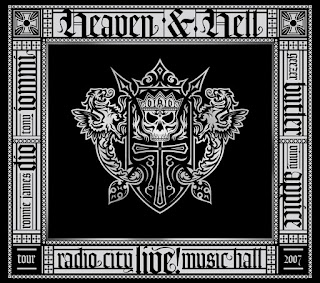 I'm sure most of you reading this are well aware that a considerable number of long-serving Black Sabbath fans held a distinct antipathy towards the Ronnie James Dio-fronted version of the band. Some still do, up to this day. Not only because, you know, Ozzy Osbourne was no longer around and there's no Sabbath without him and so on, but also because they felt it didn't sound like Black Sabbath, being pretty much a different entity altogether. I don't think such notion holds that much water to be honest, as 3/4 of the original behemoth were initially there to begin with, but it's sure open to debate, as anyone who listen to, say, "Heaven and Hell" right after "Volume 4" will notice at least a few perceivable (though not truly obvious) differences between the two incarnations of the band. That said, the decision to brand the reunion of Dio, Iommi, Butler and Appice as Heaven & Hell may have been made for practical reasons alone (basically, Ozzy would sue them had they insisted on using the Black Sabbath name), but it was also a chance to give the band a newfound personality. Taking the Sabbath logo out of the picture and including no songs from the original incarnation of the group allowed them to show just how relevant their musical input was, is, and forever shall be - and that's precisely what they did, may the Devil be praised.

"Live! Radio City Music Hall" came out as both CD and DVD in 2007, and it was the very first release under the Heaven & Hell moniker - though is surely does not sound so. Not only because of the supremely confident and powerful performance delivered that night, but also because it immediately sounds like being part of a cohesive canon, like a setlist selected from the opera omnia of a proper band rather than snippets from a entirely different entity. As a concept, Heaven & Hell is instantly coherent, credible and respectable - and it's something way more important than it may seem to be at first, as this choice cements the reunion as a bona fide proposition and not just a sophisticated, but ultimately disappointing cash-in (have I heard someone screaming "Reunion-era Black Sabbath with Ozzy"?). Sure, none of this would have any effect if these four gentlemen weren't undisputed masters of their trade, something that a single listen to this nearly 2-hour long set will be more than enough to demonstrate.

All performances are no less than stellar here. The fact that somehow Tony Iommi and Geezer Butler managed to get together and create such amazingly heavy music for roughly 50 years is an good argument for the existence of a higher power if you ask me, and this recording is yet another testimony to their complete control over all things heavy metal. Vinny Appice is often overlooked when it comes to list the great metal drummers of all time, but few out there can play basic and still fill every single empty space of a song like he does. As for Dio's performance here, we'll all have to agree that the timbre and pitch of his voice were slightly worn out after many years of heavy duty, but his versatility and sense of interpretation are no short of remarkable. He sure knew when to add color and drama to a song, and he even delivers a metal-as-you-like scream at the start of "The Mob Rules" that many singers half his age would be proud to immortalize on tape. Dio is easily one of the most important voices ever when it comes to hard/heavy music, and nearly all songs here featured will provide strong corroborating evidence on this regard.

The setlist that night was very special too, pairing the undisputed classics ("Children of the Sea", "Die Young", "Voodoo", "Neon Knights") with some minor surprises ("Falling Off the Edge of the World", "Lonely is the Word") and some good picks from the "Dehumanizer" era - one of those, "After All (The Dead)", being an unexpected (but ultimately very effective) choice for the opening number that night. Two out of three new songs from "The Dio Years" also make an appearance, and both "The Devil Cried" and "Shadow of the Wind" leave nothing to be desired alongside the more well-known staples, surviving the hard test of the live environment with great aplomb. The fact that these gentlemen can get away with such long versions of "Heaven and Hell" (this one is over 15 minutes long, mind you) without a scratch to their armor is a testimony on both their collective prowess and the perennial genius behind this colossus of a song, easily one of the best tunes in heavy metal history, period. Add some near-perfect production values (the muddy sound in "Live Evil" was a difficult lesson they never allowed themselves to forget, I'd wager) and we're very close to "essential for any serious metal collection" territory here.

It's always risky (and potentially misleading) to draw comparisons between Ozzy-era and Dio-era Sabbath, and I started this same review by pointing out just how much of a non-started this feud ultimately is. Still, I'm going to contradict myself right now, and may the world forgive me for saying it out loud: the Dio-era reunion personified on Heaven & Hell was way more exciting and musically relevant than the original Ozzy-era reunion. There's a definite sense of ambition going on all over this 2-CD set, and it actually gets stronger when you watch the DVD and see how committed and unrelenting they were upon the stage that night. Heaven & Hell is a band with something to prove, unwilling to rest on their laurels, determined to be relevant for what they were doing and/or about to do, not for what was done in the long distant past. It's somewhat ironic that Black Sabbath needed to change names to record and release the finest live album from their entire career - and yeah, I know some hardcore fans won't take this pun of mine very kindly, but nevermind. This album is pure metal magic, plain and simple, so do yourself a favor and get a copy of this one. Like, right now.

Have you been involved with any of the bands mentioned here? Have any extra info and/or corrections? Please e-mail me (drequon@gmail.com) and let me know!
Postado por Drequon às 15:37