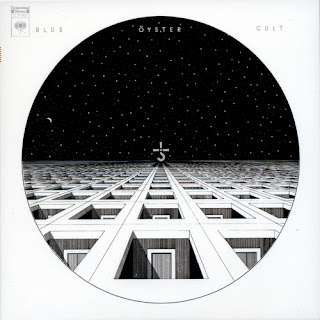 The quest for a "new Black Sabbath" was a whole niche of the heavy rock market in the first half of the 1970s, and it made a whole particular sense in the USA, where the British metal pioneers were an instant (and resounding) success. Many American rock labels were more than willing to add some Sabbath-sounding hopefuls to their roster at the time, but most of these attempts didn't exactly become money-makers overnight - an example being Pentagram, that would only be regarded as a relevant name in the scene more than 30 years after their original arrival. A notable exception (in more ways than one) would be Blue Öyster Cult, a band that was very much directed by manager Sandy Pearlman to become the American response to Black Sabbath, but still achieved huge success by crafting sound and imagery that, despite the similarities, were actually all their own.

It wasn't an immediate hit, mind you: formed in 1967 under the (rather hopeless) moniker Soft White Underbelly, they got as far as to record an album's worth of material for Elektra the following year, but the label had second thoughts and decided to shelve the whole thing. When original singer Les Braunstein packed his bags, Eric Bloom (the band's then acoustic engineer) assumed the mike stand and the most recognizable line-up (with Albert Bouchard, Allen Lanier and Buck Dharma) started to take place. Still, sessions for another purported album (now under the guise of Stalk-Forrest Group) being rejected by both Columbia and (wait for it) Elektra in 1970 wasn't exactly an auspicious sign, and the group's future was pretty much in doubt. It wasn't until they adopted a definitely darker outlook and the stupendously ominous Blue Öyster Cult name (seriously, I love it, what a truly inspired choice) in 1971 that things really got going - and when Joe Bouchard joined, shortly before tapes started rolling for the (at last) debut LP, all pieces were in place for something truly special.

Still, and despite of its many merits, not many people out there will rank "Blue Öyster Cult" (the album) as their crowning achievement, and with good enough reason. It's the product of a band that were still developing their trademark sound: songs like "Scream" and "She's as Beautiful as a Foot" (I love this one, really) bring more than a hint of the band's psychedelic roots, while "Then Came the Last Days of May" (touching lyrics about a drug deal gone horribly wrong) and final tune "Redeemed" hark to an even earlier period, with highly harmonized vocals (most prominently on the latter) and some definitely folky leanings (on both). Nothing to be ashamed of, that's for sure, most of all because the aforementioned tunes are all pretty good nonetheless. It's more a case of intended impact rather then songwriting quality per se: if you want to be the leader of the pack (and BÖC surely did hope so), you do need to have an immediate, awe-inducing effect on your target listeners, and this LP is a tad more multi-layered and sedated than recommended to achieve such results.

But let's be fair: BÖC never wanted to have the EXACT same impact than Black Sabbath after all. Where the lads from Birmingham wanted to sound malevolent and kinematic, their American counterparts were always more about creating a mystique, being less forceful in their delivery, but surely more intellectual and enigmatic in their approach. Blue Öyster Cult is no stranger to subtlety, and even the most fanatical Sabbath followers will have to admit that being subtle was never the band's forté. Having dedicated (and very talented) outside lyricists like Sandy Pearlman, Richard Meltzer and (in a later period) Michael Moorcock and Patti Smith sure helped their cause, but the band members themselves were expertly walking the thin line between heaviness and melody from an early stage, so it's fair to give them credit where is due.

There's a lot of great songs around here. "Transmaniacon MC" is a great opener, and it sets much of the vocabulary that will be developed from this point onwards, both on the album itself and in their following releases. The hard-rocking intentions, the busy (but not too complex) guitar interplay, the sardonic singing from Eric Bloom, the unusual lyrical approach, the quirky songwriting and slightly unsettling atmosphere: it's all displayed on this particular number, and this single tune tells the casual listener many things one need to know before delving into the band's repertoire. Other highlights are "Stairway to the Stars" (truly memorable chorus), "Before the Kiss, a Redcap" and "Workshop of the Telescopes", all very engaging and with menacing, quasi-theatrical leanings that work for mostly great effect. "Cities on Flame with Rock and Roll", despite unashamedly pilfering the main riff from Black Sabbath's "The Wizard", is perhaps the most emblematic tune of this debut, tailored for the enjoyment of massive audiences while still keeping a devilish, occult-tinged bite. They're not just playing rock and roll, you see: they are burning cities to the ground with it, which is pretty cool if you ask me.

I guess "I'm On the Lamb But I Ain't No Sheep" leaves something (perhaps a lot) to be desired, but it would be revamped in pretty effective fashion on the forthcoming "Tyranny and Mutation" LP, so I guess it's still worth it as a curiosity. All things considered, "Blue Öyster Cult" (the album) is a good introduction to the band's canon, as it shows the group on its more straightforward, unpolished outlook and still gives a lot of clues on what was soon to come. In attitude and spirit, BÖC already were eccentric rockstars from the dark side, and though not fully developed just yet, this asset is already evident on nearly every groove of this LP.