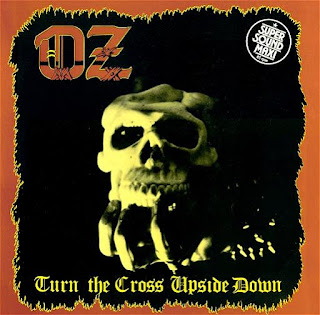 I suppose everyone will agree that "Fire in the Brain" was a huge achievement for Oz, taking this Finnish metallers several steps further in the European metal scene. Not that they became world beaters overnight, but the hopeless days of "Heavy Metal Heroes" were put far behind them and Oz looked and sounded like serious contenders from that point onwards. And what would you do after scoring such a magnificent goal, turning a seemingly hopeless scoreline around when no one was expecting it? You play safe, of course.

"Turn the Cross Upside Down" (the EP, that is) is basically an attempt to keep momentum going, not only by recycling two of the finest songs from their previous opus ("Search Lights" and "Gambler"), but also by giving pride of place to a new song that honoured their recent output while giving credible hints of what was to come. "Turn the Cross Upside Down" (the song) starts with pretty epic twin-guitar harmonies before launching into a fast-paced attack that is very likely to put your neck in almost instant motion. Still, it's fair to say they are a bit less frenzied this time around, keeping a fair dose of drive while taking a tad more conservative approach when it comes to speed. The lyrics are not a showcase of poetic subtlety, that's for sure, dealing with satanic imagery in an ultra-clichéd fashion, but the chorus is so damn catchy that you should not be surprised if it stick to your mind for days after listening to it - not that the singalong section towards the end would leave any room for doubt! The songwriting is pretty ingenious, and Ape DeMartini's voice is in great shape, so I must conclude this song turns out victorious in its bloody battle against the lordian guards, or whatever.

The huge impact of "Fire in the Brain" would not be fully replicated by any future releases from Oz - though this humble EP got its share of belated media attention at the early 90s, with some people hinting it was something of a soundtrack for Norway's Inner Circle while burning a few churches... Yeah, a pretty bizarre assumption indeed, but nevermind. In fact, they would slow but consistently slide off the track in future releases, ultimately failing to ever recapture the sheer energy of their strongest record. In retrospect, "Turn the Cross Upside Down" (the EP, and the song as well in a sense) is as short and sweet as "Fire in the Brain" managed to be, serving as a sort of final chapter for a very exciting period in the band's career - one that lasted little more than 30 minutes in total! A fitting way for a band like Oz to reach their pinnacle, if you ask me.