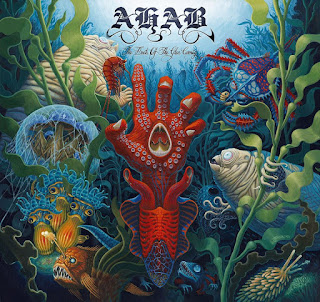 Every time I listen to a new album from Ahab, the same idea occurs to me: they're coming closer to the shore they want to reach. They have been proud flagbearers of the funeral doom genre for over a decade, as you all know, and their music consistently progresses with every album - a tendency that "The Boats of the Glen Carrig" happily (well, gloomingly) confirms. Taking their inspiration from a novel written by William Hope Hodgson about a few survivors from a shipwreck who happen to meet with some definitely strange creatures, Ahab's 4th full-lenght album ultimately fails to conjure that indefinable feel of a band's crowning achievement - but it's far from being a problem, as a single listen will prove beyond doubt that they are sailing towards it and there's no stoping them at all.

The contemplative element of 2012's "The Giant" is obviously present here too, sometimes playing a decisive role in the proceedings. You simply won't be able to listen to the almost post-rock parts in "The Thing That Made Search" and take it as a simple moodsetter for the heavier segment, for instance: the intentions of the track are actually equally strong at the both ends of the spectrum. In fact, you have to search into this very gray area created by the contrast between (relatively) clear and (immensely) dark elements to understand what Ahab is trying to achieve. It gets particularly obvious when you take Daniel Droste's vocal delivery into consideration: he still owns a guttural voice that can make your windows shake, but his cleaner register is slowly but inexorably taking over. And it's not a bad thing, you know, as it enhances the atmosphere rather than softening it and brings some truly grandiose elements to the table. They are still to perfect the formula, that's for sure, as songs like "To Mourn Job" are a little bit too predictable for their own good - you will sure have figured out the album's formula by this point, and the explosions of doom rifferama of this particular track lack impact because of that.

But those among you who enjoy doom metal as funeral as it gets have nothing to fear, really. The overwhelming heaviness that is almost synonymous with Ahab is all over this new record, though many riffs are a bit more swift (perhaps "less crushingly slow" would describe it better) this time around. "Like Read Foam (The Storm)" deserves a mention, as it's easily the more upbeat song ever recorded by the group. On the other hand, "The Weedmen" is an immense triumph for Daniel Droste and Chris Hector, with no less than 15 minutes of swirling riffs that seem to have no beginning and no end, and I mean it in a good way of course. An effect that is enhanced by an excellent production job, that always highlight the right details to create an atmosphere that is consistently dense, sometimes even disturbing, but always quite impressive.

Maybe less tolerating doom metallers will miss the more typical (and less sophisticated) approach from the days of "The Call of the Wretched Sea" (2006), which is understandable to a certain degree. But even those who truly love the Ahab of old will probably agree that, despite being truly tremendous, the early recordings of the band are far more effective than original, playing relatively safe within the boundaries of their subgenre of choice. As time progressed, Ahab sailed beyond the mapped area of funeral doom's sea, and this journey finds in "The Boats of the Glen Carrig" its strongest chapter thus far. The Ahab of today is a stronger, more relevant entity that sounds like no one else and bear a flag all of their own. I'm sure they can do even better, and the shores of their magnum opus are still to be reached - but may the spirits of the ocean have mercy on us when they finally fulfill their doom-laden destiny.

Have you been involved with any of the bands mentioned here? Have any extra info and/or corrections? Please e-mail me at drequon@gmail.com and let me know!
Postado por Drequon às 16:37