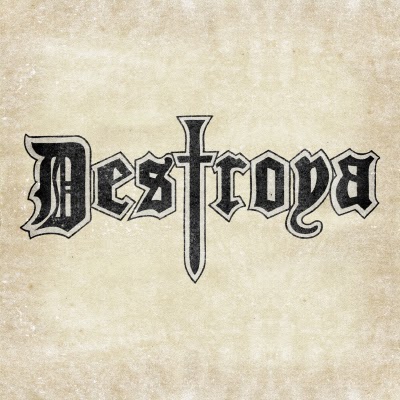 It's a pleasure for me to add a fair number of High Roller releases to my personal collection. I consider these guys to be doing a great job, bringing back some great music from the 80s (and most of all NWOBHM, of course) for die-hard fans and avid collectors to enjoy. I have been buying their CD catalog for quite a while, and now I'm adding to my humble collection some of their vinyl releases too, as I finally bought a decent turntable and therefore can delve into this amazing (and sometimes quite expensive) world, once and for all. Expect to see a fair number of High Roller releases being reviewed around here, as I have bought a lot of stuff recently!

Let's start then with the interesting 12'' EP from Destroya, formed in 1979 at the East End of London by Andy Gregory (V) and Brian Moore (B) and that had some relation with none other than Iron Maiden, as some of Destroya's first musicians were part of Maiden's crew. There's an interesting bio to be read at the insert of this EP, so I won't delve too deep into personel changes and similar info - it's enough for our purposes to say they went as far as to record a 4-track demo in early 1983, leaving behind the somber imagery of their formative years and choosing to adopt a glam look (not really attuned to most of their music to be honest, but nevermind). They also started to use some silly pseudonyms (Andy Gregory became "Diamond" and Brian Moore chose to call himself "Genocide"), and were assisted by two ex-Rampant musicians - Ricky Tiley on drums, who was christened as (prepare for a surprise) "Rampant", and guitarist Paul "Jax" Playle - for their recording of their first demo. They made a hundred copies of it back in the day, and now the tracks are available for a wider audience thanks to a careful vinyl reissue via High Roller.

After an intro full of distortion and feedback, "Violent Streets" launches in very intense fashion, with aggressive riffing and a more restrained (yet heavy enough) chorus. The production is very raw, admitedly, but I think it adds to the overall effect of juvenile energy and power. It's a good number, showing that Destroya could comfortably sit alongside the most metallic acts of the period such as Satan, Mythra and even Iron Maiden themselves (although they were surely way more riff-oriented than Steve Harris and the boys). Second song "Victims of War" reminds me, both in song structure and lyrical concept, of Jaguar's "War Machine" - even the vocal melodies are similar. I think it's no more than a coincidence (it doesn't seems reasonable to think a band actually heard the demo material of the other), but it still is quite a noticeable resemblance. It's a competent attempt to create a dramatic wartime song, even though it's a bit immature in places.

Opening side two, "Stay With Me" is the most typical song here, a heavy rocker with the usual guy-wants-a-girl lyrics like the NWOBHM bequeated us in droves. Not a bad song at all, but it's the least impressive tune on display here. The way the guitarist apparently mess things up at the beginning of the solo sums things up perfectly: it adds a bit of youthful charm, but it also sounds a bit too ramshackle for comfort. To close proceedings, "Destroya" comes out like a true proto-Thrash offering, not too many miles away from Metallica's "Whiplash" (once again, I'm pretty sure there wasn't any actual influence going on here, it's just a musical similarity). The change in pace at the chorus doesn't work perfectly well IMO, but it's a minor detail - the song as a whole being a great excuse for more enthusiastic metalheads to throw some healthy shapes all over the place. No wonder it was the opening number at their shows. A wise choice, I would add.

I wouldn't say that Destroya were victims of a brutal injustice when they disbanded a few months after releasing this demo recordings (some of them resurfaced almost imediately as Shanghai Tiger, incidentally), as there's nothing here that really defies belief in terms of quality. But they sure had a fair deal of promise, and perhaps they could have developed quite well if they managed to soldier on a little longer. Oh well, all the might-have-beens. Surprisingly, they reunited in the first half of the 90s and recorded two other demos in a more Thrash Metal style (I don't listen to it for quite a while and I guess they will be reviewed here in the not-too-distant future). This vinyl EP, though, is still their only officialy-released legacy - so I suppose buying a copy would be a good decision for anyone who loves listening to what all those crazy long-haired kids were doing in UK at the first half of the 80s. Please, High Roller, keep them coming!

(more images to be added soon!)

Have you been involved with any of the bands mentioned here? Have any extra info and/or corrections? Please e-mail me at drequon@gmail.com and let me know!
Postado por Drequon às 16:42