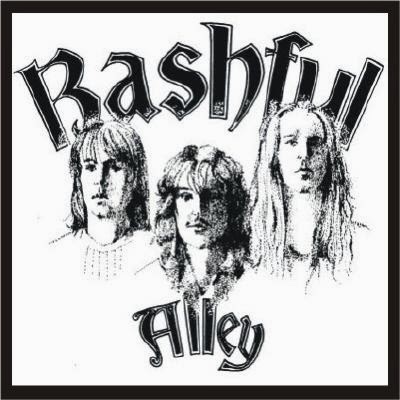 Yet another artifact from the (hopefully never ending) series of vinyl releases from High Roller Records, Bashful Alley's LP is a must-have for all you NWOBHM addicts out there. I guess you all know that their sole release in the NWOBHM days (the "Running Blind" 7'' single) is a true classic of the genre and it's great to have it included in "It's About Time", alongside all the other studio recordings of the band (ten tracks in total, but oh well). Go there and buy it straight away. Well, this is the abstract of the post, and that's pretty much all you need to know. But I suppose you will want to read the full review, right? OK, let's go then.

Bashful Alley was the brainchild of Rob Tidd (G) and Ian "Truff" Threlfall (B), both young (but slightly experienced) musicians from the Midlands. Tidd, for instance, played a while with a more rock-oriented outfit called Next, "Running Blind" being originally a part of this band's repertoire. The first line-up of Bashful Alley also included Dave Slamen (V) and a drummer called Donkey (don't ask, I don't have a clue), but the more stable unit of the group would have Robin Baxter on drums and Rob Tidd taking over vocal duties as well. They released the reasonably successful (and now near-legendary) "Running Blind" single by the small Ellie Jay label in 1982, and later decided to explore new musical avenues with Anthony Jones being added as a second guitarist. After a few years of hard working, they decided to call it a day sometime in 1985, the musicians later joining outfits such as Sleaze Brothers Inc., Dollface and Line of Fire in later years. With the NWOBHM collecting scene taking shape, Bashful Alley became a target of well-deserved (if belated) adulation - and High Roller came to the final rescue, releasing all the remaining recordings from the band in a much-welcomed LP.

There's not much left to be said about "Running Blind", for instance - a song that, as time went on, came to be a true classic of the NWOBHM genre. It's a great resume of what all the fuss was about those days: mid-paced heavy music played with youthful enthusiasm, nice riffs, catchy chorus, tons of energy... The song has it all, really. Excellent, really - and its early demo version, that closes proceedings here, is also very nice.  "My My My" was the B-side of their now classic 7'' single, and it's also a very good tune - it reminds me of Iron Maiden a bit, specially for the astute use of twin-guitar leads, but perhaps Thin Lizzy would be a closer paralel here. Another catchy vocal lines and a mellower, almost atmospheric solo session are more than enough to qualify it as another easy winner, the resulting single being one of the nicest of its kind ever to be released during the height of the NWOBHM.

The other eight songs included on this LP are taken from demos, some planned for a follow-up release that unfortunately never materialized. "She Only Wants Me for My Body", for instance, was recorded at the same session than the two takes of the single and it's strong reminiscent of Status Quo, but with an unmistakeable tongue-in-cheek vibe (c'mon, look at the song title!) that results in a fair lot of juvenile, politically-incorrect fun. "It's About Time" is even more in a Quo scheme of things, maybe a bit too much for its own good if you ask me - but oh well, there's nothing wrong about playing some good old boogie from time to time, right? "Nicotine Kiss" is more of a punkish heavy rock, very raw stuff indeed - we can forgive them for sounding a bit immature here, as it was their very first composition as a band. And there's also more of Thin Lizzy going on here, specially on "Why Can't You See?", a song that Phil Lynott himself could have penned, really. Not bad, I guess.

But Bashful Alley is at their best (as most bands usually do) when they allow themselves to be a bit more adventurous. For instance, I really like "Rescue Me" - a hard-rocker-as-usual but with nice, different lyrics and a slight change of tone at the chorus that really works quite well. It shows personality, and I really like it as a whole. "Light it Up" is also great, a more bluesy number with great guitar work that metamorphoses into a frenzied, flashing assault towards the end. Nice and funny, indeed. These two tracks could have made an awesome single under different circumstances, no doubt about that! And I guess all surviving material from Bashful Alley shows a band full of genuine potential, a bunch of musicians that could really have achieved some good things if given the required encouragement.

"It's About Time" is a good item for collectors, not only for the music, but also for its simple-but-interesting presentation. There are lyrics for all songs, nice liner notes from Rob Tidd, archive photos and so on (the LP itself is a picture-disc, incidentally). All things considered, I guess Bashful Alley deserves your careful listen and a few bucks of your money - better late than never, I would add, as they unfortunately were mostly ignored the first time around. Let's not give them the same treatment now, OK?