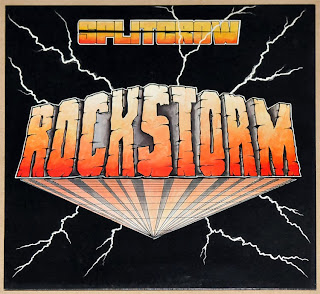 The Guardian label is a name to be fondly treasured by NWOBHM collectors and enthusiasts, as it released a huge number of albums and singles at the height of the movement in question, most of it with a strong link to Heavy Metal. But it's important to make clear that Guardian, although a mostly-Metal label, also released stuff with only a tenuous connection with the genre, and also some stuff which isn't Heavy Metal at all. Splitcrow's sole LP "Rockstorm" is not a complete stranger to Heavy Metal, but I'm sure these guys weren't even trying that hard to jump the NWOBHM bandwagon, being far more at home with a blues rock approach - something that was also very popular amongst rockers in 1984.

The album starts fairly promising, with both "Back Door Blues" and "Nobody's Gonna Stand in My Way" being interesting, intense rockers which reminded me of none other than Bad Company, which is good enough praise in my book. From that point onwards, though, we're pretty much in usual ZZ Top territory here, with mixed results when it comes to quality and intensity. Some songs are still OK, such as "In the Heat of the Night" (strong Spider feelings here), but it's hard to use positive adjectives when refering to "Lookin' Through These Miles", "Stir Crazy" or "Sweet Darlin'", for instance - songs that will only appeal to the most undemanding ZZ Top fans out there. Never really understood what's so great about the long-bearded guys from Texas, but I guess it's only me anyway - they have millions of fans worldwide and I'm sure they deserve it. Still, I reckon most NWOBHM addicts can live a very enjoyable life without devoting too much time and effort on buying a copy of this album, as most material here included will be simply unappealing to their tastes.

I guess it's not a huge surprise for anyone that Splitcrow didn't last the distance, being seemingly disbanded at a very early stage. Still, they were quite a popular band in the North East of UK (at least one of their concerts received a review in Kerrang magazine, for instance), so it's not beyond the realms of possibility that they soldiered on for a while longer. Of the musicians involved, I guess that guitarist Johnny Dickinson had the most successful story: after trying again with Paul Lamb & The Kingsnakes, The Moonshine Boys and the bizarrely-but-funnily-named Hillbillies from Outer Space, the axeman earned a stable solo career as a folk musician. Unfortunately, he is enduring a very difficult clinical condition which has prevented him from performing for quite a few years now, so we wish him to fully recover his health and get back on music as soon as possible. Rob Davison (V/G) and Nigel Stawart (D) also kept things going with a band called Poorboys (who acts under the name Indian Hill on some of their later recordings) and also as an acoustic duo who still performs to this day. They also took part in the Hillbillies From Outer Space in the past, so perhaps it was pretty much Splitcrow under a different guise. 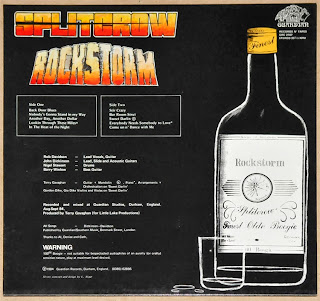 It's a bit difficult nowadays to see or hear the extraordinary qualities that some people saw in Splitcrow - they were good enough in their style of choice, but I think that a band needs to show more in terms of personality and/or style to really rank as a promise. Oh well, I guess it was the mood of the times - and it's hard to see things with hindsight being in the middle of it, right? As said above, their sole vinyl legacy is not one for those of you who wear bullet belts and patched denim vests while going to the grocery store in your neighbourhood, but maybe you should give it a try if you really love blues rock and you want something different (and slightly more intense) to make your day.

1. Back Door Blues
2. Nobody's Gonna Stand in My Way
3. Another Day, Another Dollar
4. Looking Through These Miles
5. In the Heat of the Night
6. Stir Crazy
7. Bar Room Strut
8. Sweet Darlin'
9. Everybody Needs Somebody to Love
10. Come On 'n' Dance with Me

All songs written by Dickinson / Davison

Thanks to NWOBHM Knightmare for picture sleeve photos

Have you been involved with any of the bands mentioned here? Have any extra info and/or corrections? Please e-mail me at drequon@gmail.com and let me know!
Postado por Drequon às 08:14