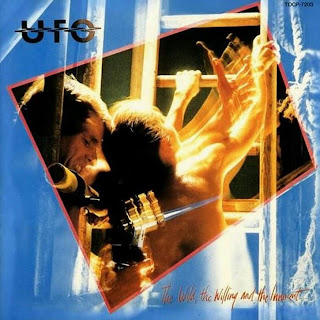 Though far from being an unmitigated disaster (some people actually seem to like it quite a lot, which is all right I guess), fact is that "No Place to Run" was hardly a world beater, and the worrying signs of impeding decadente were all over the place. To make things worse, more changes in personnel were around the corner, with Paul Raymond deciding to pack his bags to pursue a seductive offer to join none other than Michael Schenker and his Group. If UFO wanted to survive the turn of the 1980's (and be a respectable entity in the NWOBHM days they had a strong role in inspiring), they seriously needed some new and talented blood running into their system, not to mention a much stronger batch of new songs. Fortunately for the lads, "The Wild, the Willing and the Innocent" is a marked step in the right direction, a record that did strike the right chord with the renewed hard/metal scene of those days and created some much welcomed momentum for the outfit.

The vacant slot left by Raymond was aptly filled by Neil Carter, a very talented multi-instrumentalist who was previously doing the rounds with Wild Horses. Not only the versatile side of UFO's music would be retained to a great degree, but Carter also showed himself to be a worthy addition to the songwriting side of things as time progressed, recapturing some of the magic lost when iconic (and difficult) virtuoso Michael Schenker was no longer allowed to walk in from the door. With guitarist Paul Chapman seemingly more confident of his role in the band, and with both Andy Parker and Pete Way doing a fine job throughout, the instrumental side of things sounds a lot more tight, dynamic and lively than in its lacklustre predecessor - and we all know Mr. Phil Mogg is someone you can trust when it comes to singing, so the casual listener can get happily ready for a good thing coming this time around.

I read many reviews pointing out how different this record is from the earlier release with Chapman on guitar, but I beg to differ: the only thing that makes "No Place to Run" a "pop" record and "The Wild, the Willing and the Innocent" to be a "hard" record is a newfound sense of energy, as the compositions are not really that dissimilar - although WW&I is better on this regard too, no doubt about that, with songs more carefully crafted and surely focused on rocking hard rather than plodding along. It's not a impeccable record though, and some cuts seems to have been included as something of a last-minute decision, like they just didn't have the time to finish enough good songs for a full album. It's mostly a winner, no doubt about that - it's just that it is not a flawless victory, if you know what I mean.

They hit the nail right on the head in "Long Gone", an immensely capable union of heavy energy and songwriting subleties that is easily one of their best tunes from all of the 80s - and one of my favorite songs from all of their catalogue, and I mean it. Other great moments come with the nice opener "Chains Chains", "Lonely Heart" (a minor hit in the UK, a hard rocker with nice melodic parts in all the right places) and "Profession of Violence", that seems to recycle ideas from previous ballads like "Try Me" and "Belladonna", but with arguably even better results. Contrastingly, "It's Killing Me" is so confusing that it even seems to be half-finished, whereas "Couldn't Get it Right" is your typical not-bad-but-also-not-really-good filler that would hardly make it to a single B-side under different circumstances. It's fair to point out that "Makin' Moves" and the title track are songs that work nicely in the album's running order, not disrupting the flow in any sense - but I'm afraid both lack the charm to shine by their own merits, being pretty nondescript if taken out of the LP's context.

All things considered, it's not like UFO took the world by storm with "The Wild, the Willing and the Innocent", but it was the right record at the right time for them, and it sure helped to relocate the band into the very center of the Heavy Metal scene. And it's an album that didn't aged that bad either, as at least half of the songs here featured are good enough to captivate fans of hard/heavy music even today. To be honest, I even consider it to be a more accomplished record than, say, "Obsession" - yeah, kind of a polemic take here, but it comes to show just how much of a worthy addition this album can be to any respectable collection.