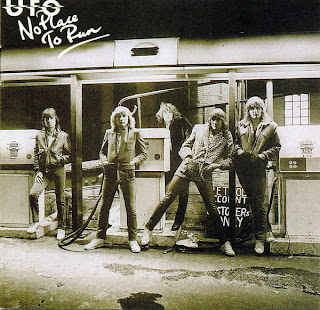 I sincerely think that, if they wanted to soldier on as a band, there wasn't much of an option for UFO in late 1978 but to get rid of Michael Schenker. Let's face it: no matter how much of a genius he was (and still is), Schenker's alcohol abuse, unpredictable mood swings and erratic behavior were all very difficult to deal with, and I fully understand why Phil Mogg (pretty much the mainman on UFO from this point onwards) felt it was about time to let the guitarist go. The excellent results of the "Strangers in the Night" live album may invite some oh-if-all-could-have-been-different meditation on many listeners, but the fact is still there for all to see: Schenker messed things up big time, to such an extent that his stand-in and future substitute Paul Chapman had to fill his shoes more than once, as the German axeman would be too inebriated and/or unwilling to perform. You can use the "there's no UFO without Schenker" card as much as you like, but it takes two to tango, you know.

The problem, as you all can imagine, is that it's not at all easy to replace an outstanding musician such as Michael Schenker. Paul Chapman (another one that has left the building way too soon, so may he Rest in Power forevermore) was a natural choice, almost a no-brainer in fact: he knew the songs by heart and was tested and approved on the live environment (I suggest looking after a semi-bootleg release named "Parker's Birthday" in case you're still in doubt). The new guy sure knew what to do with a guitar on his hands, and UFO were more than well served with him upon a stage. But you don't need more than a couple of spins to "No Place to Run" to know exactly what Chapman's achilles' heel was: he wasn't half the songwriter Michael Schenker is. Considering that Pete Way and Paul Raymond had become more of sporadic songwriters, and Phil Mogg was the kind of collaborative composer that needed someone else's instrumental ideas to work with, it's easy to understand that their ability to write seriously good music was in sensible decline.

Most of the songs featured on "No Place to Run"  lack the dynamics and the imaginative sollutions so abundant in earlier releases, being little more than competent, but rather formulaic attempts to follow the trend of the times - just like "Obsession" before it, but with perilously poorer results. Play simple music is not that simple, you know: even the most basic of songs need some sort of creativity and/or sense of urgency to capture people's minds, and UFO seems to be running out of both assets in this LP. Perhaps even more worrying is the perceivable decrease in energy, something completely at odds with the youthful enthusiasm of then-arising NWOBHM; a song like the title-track, a tune that wouldn't be more than serviceable under normal circumstances, comes out even less interesting when played in such a bureaucratic manner, like the guys were just trying to get rid of the task as fast as they could.

Don't get me wrong: these guys were still masters of their trade, and songs such as "Money Money" (an intense heavy rocker with nice use of support vocals and guitar embellishments, perhaps the best composition from the entire record), "This Fire Burns Tonight" (nice chorus) and the competent version of Junior Parker's "Mystery Train" (excellent solos on this one) are sure to make fans happy. I also like ballad "Take it or Leave it", a truly beautiful track with delicate, neat arrangements. But redundant, less-than-enthusiastic rockers like "Lettin' Go" and "Young Blood" don't help matters at all, and poor tracks like "Anyday" (a very confusing composition that fades out to oblivion before threatening to make sense) and "Gone in the Night" (a sort of cabaret-vibe rock and roll that simply doesn't work to any extent) are close to an embarassment, if we're to be honest here.

As a whole, "No Place to Run" sounds too midtempo and tamed to be a strong contender, let alone in a moment when the NWOBHM was taking the world by storm with a much more energetic, dynamic and forceful musical approach. Much of the blame should go to the production / mixing job by George Martin - a household name that may have seemed quite a strong choice at the time (he used to be the Fifth Beatle, for God's sake), but turned out to be disappointing due to the bland, faceless results of his work here. Nothing sounds real bad, but nothing stands above average either, a shortcoming that only adds to the run-of-the-mill feeling of the proceedings. While bands like Judas Priest, Scorpions and even Black Sabbath were successfully adjusting their sound and image to the new times, UFO were missing the wave they pretty much saw before anyone else.

"No Place to Run" wasn't that good when it came out in early 1980, and it surely didn't get better with age, so there's no urgency to buy it unless you're already a fan (like myself, for instance). The great comercial success of "Strangers in the Night" would still keep UFO's head above water a while longer, but they seriously needed to deliver something more substantial next time around, if they really wanted to survive as a relevant group in the very competitive rock/metal environment of the 1980s. And credit where is due: they surely tried hard.