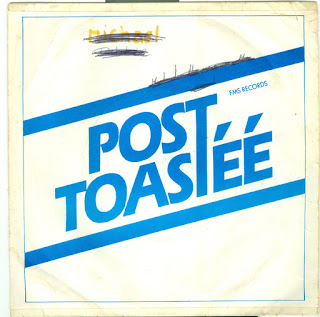 Though not a complete unknown for early NWOBHM aficionados, the only 7'' by East Anglia's Post Toastéé became a much more sought-after piece in later years, which means it's now quite more difficult (and expensive) to obtain a copy than it was a decade ago, for instance. It's an endeavor that only seasoned (and wealthy) collectors should really bother to engage into, though, as most of us will be well served with the mp3 files that are floating around online, and it's hard to justify such a significant investment in terms of musical merits alone - it does have one pretty nice song out of two, as I'm about to elaborate, but most of us simply won't be willing to pay three-figure prices for one song, you know. That being said, and despite the lack of useful info at present (if the band's name rings any bells, send us an e-mail, will you?), there are well enough things to be said in a individual review.

Released by the mysterious FMS Records (probably a self-financed release, you know) sometime in 1983, their sole claim to fame comes in an unassuming (though surely distinctive enough) cover with the band's logo and a few basic details about recording and personnel. "Take You Home Tonight" is the A-side, and it's pretty much a pop rock tune with disco leanings, most apparent in the harmonized vocals and drumwork. The keyboards use some typical Casio effects that really didn't stood well the test of time (not his fault really, just a case of hopelessly dated aesthetics) and the chorus is as radio-friendly as it gets, so it's easy to assume they didn't exactly have the heavy metal fraternity in mind while writing and recording this one. Hardly recommended for diehard metalheads, I'm afraid.

But not all is lost though, as flipside "Little Too Late" gets undeniably closer to the NWOBHM tastes, though it's more of a Uriah Heep-ish style of 70s hard rock rather than anything more contemporary. The keyboard/guitar interplay works nicely, with a very evident fondness for Deep Purple going on (not a surprise I guess, as the Post Toastéé name is probably taken from a solo effort from Tommy Bolin), and the simple-but-effective rhythm section carries the song along very efficiently. The singer's voice works quite well here too, with a nice chorus and all, and it's safe to assume that "Little Too Late" will be regarded as a very acceptable tune by most NWOBHM enthusiasts out there. Good stuff, and well enough to deserve a 3-star rating after all. 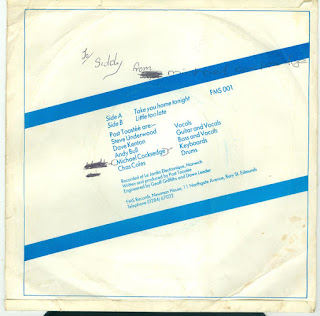 Post Toastéé seems to have been a brief episode in the lives of those involved, presumably being no longer active well before the second half of the 1980s. I have no idea if the Steve Underwood here mentioned is the same one who runs the punk/noise/minimal wave Harbinger Sound label, also acting as a producer / manager for a lot of bands roughly in the same music style; I wouldn't be too surprised if it turns out to be the case, though such a shift in music personality would perhaps come as a surprise for some. A certain Andy Bull seems to have had a minor level of involvement with a post-IQ outfit called Niadem's Ghost, as well as doing some engineering work here and there, but I'd like to have more conclusive evidence before building the bridge between this individual and the one playing bass for Post Toastéé. Keyboard player Michael Cocksedge is the only ex-member whose whereabouts I can conclusively decline right now, as he's playing bass guitar with a tribute band called The Pure Floyd Show.

Many thanks to Discogs for sleeve pictures!