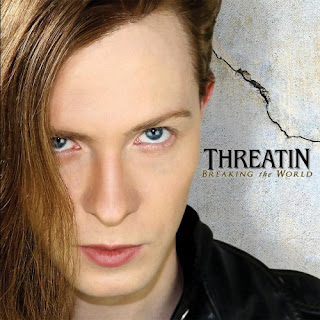 Yeah, I know. Why am I doing this? If there was anything clear from the start when the whole Threatin fiasco exploded nearly a week ago, it's that the music itself would be nothing to write home about: let's face it, Jered Threatin (the man who set this all in motion) would hardly need to put so much time and money into faking booking agencies, doctoring live videos, buying a bot fanbase and paying a whole European tour out of his own pocket if he had some insanely good music under his belt. Still, I'm as fascinated by this absurd scenario as much as anyone else (if you spent time on Mars recently and haven't got a clue on what I'm talking about, all the info you need are available here), and, as a direct consequence, I was increasingly curious to listen to "Breaking the World", the debut CD Threating was supposed to be promoting in their not-remotely-packed live outings. The YouTube videos didn't exactly set me into wild anticipation, but I decided to have a chance with the whole album anyway. I don't know, maybe I just felt bad for the guy - though I sure have way more sympathy for the venues, staff, opening acts and live musicians he conned into his scheme. Or maybe I just felt it was a good challenge: write a fair review about Threatin's debut CD, trying to be as neutral as I can while doing so - quite a hard task for sure, given the ridiculous amount of (mostly bad) publicity generated by such absurd chain of events.

Extraordinary circumstances aside, "Breaking the World" is your typical small-time, one-man-band bedroom release. Jered wrote all the music and lyrics, allegedly recorded all instruments (though I'm almost entirely convinced the drum parts are made of samples for the most part) and vocals, and produced the whole thing himself - and oh yeah, he posed for the front cover picture too. His style of choice is what I would call pop metal, in lack of a better term: pretty simple, radio-friendly (and kinda cheesy) heavy rock music, with slightly more forceful guitar work in places and highly melodic vocals, even reminiscent of Hanson (yeah, I know) when in its most saccharine. I wouldn't call it a recipe for disaster, but it's a well-worn formula that demands a lot of songwriting skill to really mean business - something conspicuously lacking around here, I'm afraid.

The production job is distinctively average. The guitar parts, though well played and with some good solos and leads, are a bit too up front in the mix IMO, and I would surely have enjoyed a more dynamic approach to the vocals as well. Jered Threatin is not devoid of talent at all, but he never moves away from the same damn octave throughout the album: never a deeper tone, never a more adventurous variation, always the same high-pitched, strident delivery from moment one to the final throes of the record. In "Fade Into Never" his voice sounds slightly like James Hetfield in a few inflections, but nothing that veers too far from his usual young-rock-band register. And the fact that Jered used to play bass when onstage with his former band Saetith is kinda surprising, as basslines received quite an unflattering treatment around here, being almost impossible to discern it in some songs. Curiously, two of the most accomplished songs in the entire CD ("The Place Between" and "Impulse") are also the ones where the bass is most prominently featured - nothing out of this world really, but it's a welcome change when you're dealing with a record that is so keen to repeat itself over and over again.

In fact, the lack of variation is one of the album's most glaring flaws. Some ideas, though far from staggeringly original, would have worked out way better if not stretched to near-breaking point, as it turned out to be the case. Most songs are build upon just two or three basic patterns repeated ad nauseam, and sometimes even re-used in other tunes just to make things more repetitive. For instance, the melody used for the verses in "The End of You" (one of the most mediocre ditties here featured) is a near carbon-copy of the preceeding track "Living is Dying", a fact that creates the somewhat disturbing feeling of being listening to a rearranged version rather than a different song.

It's difficult to pinpoint highlights here, either positive or negative, since nearly all tracks are pretty generic and interchangeable, and the lyrics are basic at best - some verses, such as "If Need Be" and the aforementioned "Living is Dying", sound downright puerile in its deep-as-a-puddle images of existential crisis. It's not appallingly bad, see: it's just that it's too average to leave any lasting impression, a scenario made even more hopeless by the tales of glory Jered Threatin created around himself and that are now falling flat on his face. If I had received these files as demos from aspiring young musicians who were still trying to get a good thing going, I would surely be inclined to be more charitable about its merits - but it would still be clear to me that they needed some extra months of hard work on their songs before the next step. If you say you're bringing classic rock back or something, I'd expect you to have more to offer than a dozen not-bad-but-not-that-good songs with a semi-amateurish production job to match.

"Breaking the World" badly needed a producer if you ask me -  someone with enough knowledge and authority to trim Jered Threatin's ego, bring some extra musicians into the picture and apply some rigorous quality control to the whole thing. Had it been done, perhaps we would have a pretty decent EP with a handful of good-enough tunes and some replay value to its credit; the way things turned out to be, unfortunately, "Breaking the World" is little more than a not-really-impressive vanity release, a record that would be condemned to forever rest in bargain bins if not for the sudden interest raised by the whole European-tour-gone-wrong debacle. People are sure willing to listen to it, just as I did tonight, but mostly to have a laugh on it rather than giving it a fair chance. It's a cruel state of affairs but, by scamming his way into the headlines as he did, the mastermind behind the music really should have seen it coming. He demeaned his own art, as simple as that.

Jered Threatin sure invested blood, sweat and tears (not to mention loads of money) on his dream, but his efforts were all pointed the wrong way: he wanted to have a high profile before having a career, so he did record a full-length album before crafting a suitable repertoire. In a nutshell, this album is a faithful depiction of the Threatin project as a whole: a ego-driven fantasy that tried to take the world by storm by using shortcuts rather than slowly building a solid entity to be proud of. The one-star rating is perhaps a bit too harsh (it's not like a vomit-inducing album or anything, so perhaps a two-star would be a more adequate choice), but I'm not the one who sold this artifact as a masterpiece, you see, and I sincerely hope no legitimate record label will sign Threatin in the near future, as such shenanigans should never be encouraged, let alone rewarded with a deal, and there's literaly thousands of more deserving bands working real hard to get a break. I don't wish Jered bad, but he's now bound to reap the whirlwind, and let's hope he learns something from the backlash, because he damn sure deserves it.

Jered Threatin (vocals and all instruments)

Have you been involved with any of the bands mentioned here? Have any extra info and/or corrections? Please e-mail me (drequon@gmail.com) and let me know!
Postado por Drequon às 19:55