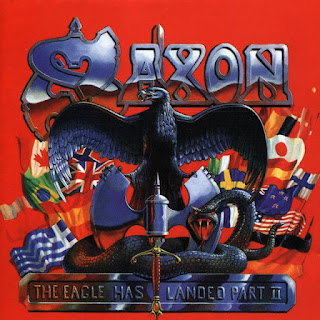 It was a long way back to the top (well, sort of), but Saxon finally fulfilled their redemption with 1995's highly accomplished "Dogs of War". Maybe the sales figures weren't as impressive as one would expect, but the metal fraternity surely welcomed this major return to form with open arms, and the lenghty (and healthly lucrative) tour that followed was a direct consequence of renewed general interest in the band's activities. To celebrate their improved status, and as a much-needed break before a new batch of songs could be properly written and recorded, the English stalwarts picked some cuts from their recent German jaunt and assembled it as the somewhat pompous "The Eagle Has Landed Part II" 2-CD release. As an extra, the album also served the purpose to formally introduce new axeman Doug Scarrat, being the first release to ostensibly feature his name and contributions. Not a classic by any stretch, this live record is a pretty pleasant listen all the same, and I feel there's enough things to say about it to justify the exercise of a short review, at least.

Given that "Dogs of War" was the album being promoted during the gigs, and remembering how well received it was by the time of its release, it's a somewhat unexpected fact that it's mostly absent in the running order. There's only three songs from the aforementioned album, while "Solid Ball of Rock" (a not-very-successful and, honestly, less interesting CD) is granted with no less than five inclusions - and I'm not mentioning the preludes, mind you. I mean, we could easily had lived without "Can't Stop Rockin'" or "Ain't Gonna Take it" in order to have some "Burning Wheels" or "Yesterday's Gone" included. Who knows, maybe the lads just found out their most recent batch of compositions, albeit pretty strong as a studio offering, just didn't have enough bite to make the pundits go wild in the live environment or something. At least the few inclusions from their 1995 opus are all strong and effective, with both "Dogs of War" and "The Great White Buffalo" ranking amongst the best renditions of the entire set - and "Demolition Alley", surely an unusual choice for a final track, actually works out fine too, being a pleasant and upbeat way to close proceedings.

Quite well recorded and mixed, "The Eagle Has Landed Part II" is still not recommended for those unfamiliar with Saxon, due to the fact that only a few classics from the 1980s actually made it into the final product. "Denim and Leather" features guest Swedish axeman Yngwie Malmsteen making one of his typically excessive, tasteless performances, so I'd say it's hardly the best version of this NWOBHM standard ever recorded, you know. "Crusader" (in abridged form) serves its purpose well enough, and the mandatory duo of "Princess of the Night" and "Wheels of Steel" can do no wrong as well, but I'd pick "The Eagle Has Landed" as a true highlight here: its remarkable atmosphere works admirably well upon a stage, and Biff Byford really sings his heart out on this one. But that's pretty much it when it comes to classic-era Saxon around here, and I'm sure any old-time fans of the band will be more than capable to name over a dozen other tracks from the old days that could (and, in some cases, should) have been included. I truly understand the reason for such omissions, as this live album was meant to celebrate recent achievements rather than past glories, but the resulting package turns out to be one for those already converted, as newcomers will hardly have a representative picture of Saxon's trajetory with this one.

That all said, there's really no reason to dismiss this one if you're a fan, and don't hesitate to spend a few bucks on it if you find a copy being offered for sale. There's hardly any turkey on sight, and Saxon does a commendable job in both the hard-hitters ("Light in the Sky", "Crash Dive", "Forever Free") and the more thoughtful, subtle moments ("Requiem", "Iron Wheels", "Refugee"), so you can rest assured that you're going to spend an hour and a half with some truly pleasant music coming out of your speakers.

Have you been involved with any of the bands mentioned here? Have any extra info and/or corrections? Please e-mail me (drequon@gmail.com) and let me know!
Postado por Drequon às 08:33