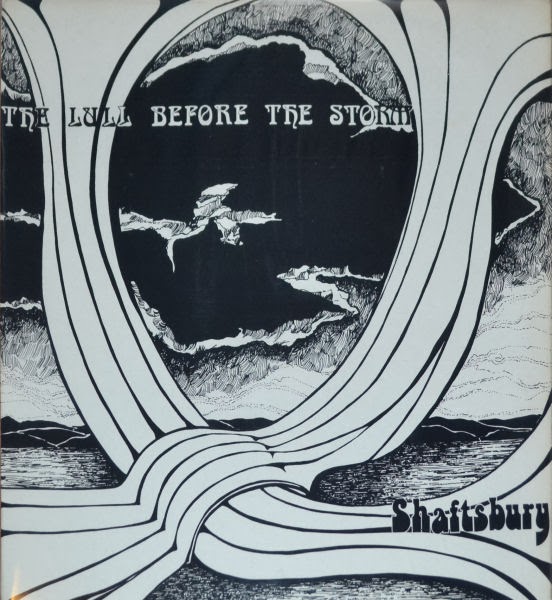 It's a well-known phenomenom amongst NWOBHM collectors and enthusiasts: British bands from the 70s (many of those were never that much into Metal in the first place) that found in the thriving Heavy Metal scene a chance to boost their careers and made their best to fit the NWOBHM bandwagon, with varied levels of sucess. Some examples are more notable, as Stray (and they managed to release a great NWOBHM impersonation with "This One is For You", for instance), Nutz (metamorphosed as Rage) and the early 80s period of bands such as Budgie and Atomic Rooster, to name a few. Shaftsbury is nowhere near the aforementioned bands when it comes to recognition or fanbase, but it's a very illustrative example of such adaptation - although I consider them to have done better with their original musical mindset, you know.

Hailing from Portsmouth (UK), Shaftsbury were quite an active unit in the club scene of UK in the 70s, being probably doing the rounds since the early half of the decade and creating a strong local following in the process. There are reports, for instance, of a prestigious appearance at the British television talent show "New Faces" as early as May 1975, which tends to suggest they were active for a good while previously. The nucleus of Dave Martin (V/B), Peter Roffey (G) and Roger Grigg (D/K/V) remained strong for nearly all of the band's lifespan, and they seem to have experimented with individual compositions from an early stage, although their shows always presented the usual bit of rock and roll covers to make everyone happy. Judging from their debut LP "The Lull Before the Storm", released by independent label OK Records in 1979, their collective songwriting talents leaned towards prog rock territory, but with numerous references to heavier brands of music - and a generous bit of MOR stuff like Eagles, to be honest. Nothing too close to then-incipient NWOBHM, although there's enough here to justify a few careful listens, no doubt about that.

The LP opens in quite unexciting fashion with "Electric Woman", a very basic rocker that may well have been a live favorite but fails to create any good impression here. Things improve greatly with "No No Never" though, a song that shows Shaftsbury at their best - a good mix of rocking energy and interesting tempo changes, creating a very dynamic (and yet catchy) atmosphere. Much more into 70s rock than anything more modern, but still a nice job, lads. And things get even better with their inspired version of "I (Who Have Nothing)": they took the old song from the 60s and gave it a heavy, engaging atmosphere that really works to great effect. "Liar" goes pretty much in the same vein of "No No Never", but with considerably less captivating results - although it's probably the closest we get to NWOBHM territory here, and that there's even a few hints of none other than Queen at the more subtle parts of the song. It's not bad at all, it's just that it doesn't work that well as a unit, you know. 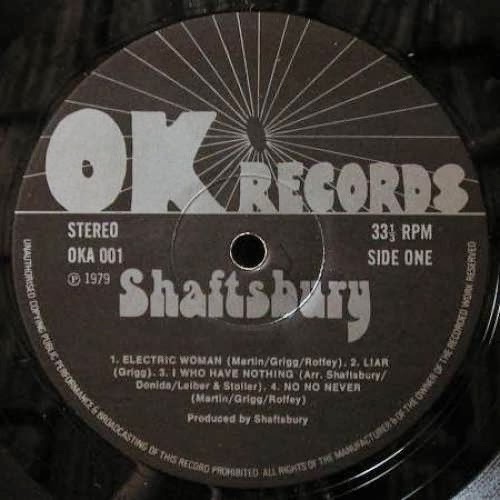 The B-side of this LP is seemingly a concept piece, fully written by multi-talented Roger Grigg about a ship enduring some dificulties at the ocean - a subject that seems to fascinate a lot of heavy rockers out there, as Steve Harris and his outstanding "Rime of the Ancient Mariner" would be happy to testify. Unfortunately, "Captain Lane" is by far the less interesting song here, a soft rock that sounds more like a rejected demo from America than anything more substantial, to be honest. I could have easily lived without it - but when the 13-minute opus "The Lull Before the Storm" starts it seems fair enough to have endured the yawn-inducing predecessor. It's not at all easy to write a convoluted, multilayered song that actually captures the listener's attention from start to finish - and it's quite impressive that Shaftsbury actually made it, as this effort works remarkably well most of the time. OK, I'm not that much into the chorus (way too simple for my taste, sorry about being such a cold-hearted guy), but there's a lot to enjoy here - even the atmospheric part near the end works quite nicely, which is quite an achievement in itself. There's a lot of nice guitar duels and the arrangements are very careful too. "The Lull Before the Storm" may have started unpromisingly, but it sure ends like a considerable winner - and I think that anyone who likes the heavy music from the 70s (and the early 80s, why not?) will find things to be enjoyed within the grooves of this LP. A very strong 3-stars for this one, believe me.

Working relentlessly in the live environment (they gigged all over UK and seemingly went as far as travelling to Spain and Cyprus, don't ask me how), Shaftsbury built a good reputation for themselves, enough to justify further vinyl releases from OK Records. I'll write a few words about it in the near future, but I can say right now that "The Lull Before the Storm" is the best from Shaftsbury IMO, as they would later try their hardest to embody the heavy mood of the times, becoming pretty much a NWOBHM proposition - but not a really good one at that, at least to my humble and fallible ears.