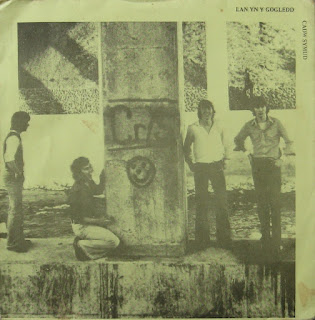 I must admit that Welsh-language rock music have a strange and intense effect on me. Not that they are specially heavy (they're not) or that their songs are incredible pieces of stunning musicianship (most of the time they aren't), but I still think they have some sort of different and fascinating atmosphere to their music - like a taste of a bygone age, perhaps. Sing in welsh is more than an aesthetical option - it's a compromise. Welsh music is, as a whole, a way to keep alive not only a minority language always threatened by anglophony, but also the cultural richness it holds - even if loud guitars and pounding rhythm sections are far from epitomise the contemplative nature of welsh culture.

From all the heavy-rocking propositions that adopted Welsh as their language of choice (not a countless number, mind you), Crys was possibly the most successful of all. This band from Neath released some full albuns on the Sain label (a reference of Welsh-language music even today) and even get to receive a modicum of praise at the english-speaking UK, with a "Friday Rock Show" session to call their own - something that no other Welsh-tongue heavy band ever managed to achieve at any time. A respectable history that lives to this day - and as I wait for the mail order to deliver my copy of "Sgrech" compilation CD, I reckon that it would be a good idea to give you all my thoughts on their earlier career, starting out with this rare 7" released in 1980 by the minuscule Click label.

Actually, it transpires that singing in welsh wasn't the first choice for the lads - they started doing the rounds in 1976 as a band called Salic Law and performing in English. Things would change at the end of the decade, when they supported a band called Trobwll. One of the musicians from Trobwll, Richard Morris owned a recording facility called Stiwdio's Bwthyn, and two other then members of the band - Gary Melville and Geraint Williams - would secure a deal to the youngsters if they could record a few songs in Welsh. The resulting single would be their first appearance under the Crys guise - which translates literally as "Shirt" by the way. Not the most Metal monicker of all time, but oh well. Curiously, this 7" was the only Crys release to feature guest keyboardist Verden Allen, who also recorded with artists such as David Bowie, Mott the Hoople and Jimmy Cliff. 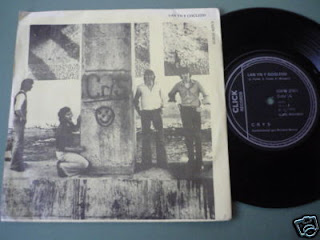 "Lan Yn Y Gogledd" is not the most spetacular song you'll ever hear, that's for sure - it evolves around a pretty basic riff and unmemorable vocal lines, with some not-really-impressive keyboard arrangements to embellish the whole thing (I guess that was what they had in mind, anyway). They were unexperienced hopefuls and still had a lot to learn, of course - but this early glimpse of their collective talents wasn't as promising as we would expect, to be honest. Which is a whole different case when it comes to "Cadw Symud", the flipside of this 7" single. This song is markedly better than its predecessor, with a reasonably good twin-guitar opening leading to a more upbeat number with a simple-and-catchy chorus. Even the keyboard intrusions, albeit still very rudimentary, seem more into place in this song, helping it to sound even better. If "Lan Yn Y Gogledd" seems too weak to tell us of better things to come, "Cawd Symud" come to rescue, showing that Crys could give us some pretty good music when they put theirs minds on it. And it eventually was the case on later records, fortunately.

Extra special thanks to Strappado's Metal Blog and user Keir for mp3 files and scans!

Have you been involved with any of the bands mentioned here? Have any extra info and/or corrections? Please e-mail me at drequon@gmail.com and let me know!
Postado por Drequon às 07:00